Christianity’s Distinctives “There is one body, and one Spirit, even as ye are called in one hope of your calling; one Lord, one faith, one baptism, one God and Father of all, who is above all, and through all, and in you all.” Ephesians 4:4-6 KJV 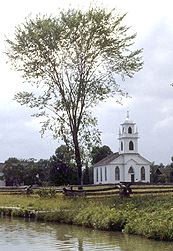 There is a prevailing attitude in the world today that discourages diversity in thought or opinions. There is hostility when individual judgment runs counter to the prevailing views. “Political correctness” is trumpeted as desirable. Even in societies where freedom of speech and expression are accepted as liberties, one who expresses a divergent view on an issue comes under careful scrutiny, and even overt opposition.

Nowhere are these attitudes more evident than in the realm of religious or spiritual ideas. There is a subtle but concerted movement toward uniformity of thought by embracing the similarities and downplaying the differences. Christians who are desirous of maintaining the principles and teachings of Scripture find themselves in a constant state of opposition with those who have an agenda for uniformity. “Why is it important to consider these distinctives?” one may argue. “Isn’t it enough to trust Christ as Savior and experience His gift of salvation? Is it so important to stand out like a ‘sore thumb’ – to be so radical that you handicap the preaching of the gospel?”

These are valid concerns, but a thorough understanding of biblical Christianity reveals that there are distinctives that cannot be surrendered for popularity or acceptance. What are these distinctives? What are the features that distinguish Christianity; the characteristics that portray in a practical way a follower of Jesus Christ? These are some of the things that engage the hearts of those who desire to be true disciples of the Lord.

One Foundation
The basic fundamental upon which all else hangs is faith in Jesus Christ. It is not the observance of a code of ethics or adherence to a system of belief. Rather, it is foremost the person of Jesus Christ that distinguishes Christianity; without Him there would be no Christianity. Apart from faith in Him there is no salvation. Not only is it belief in Him, but belief in Him only. Acts 4:12 records the words of Peter as he defended himself before Annas the High Priest: “Neither is there salvation in any other; for there is none other name under heaven given among men, whereby we must be saved.” Jesus Himself, speaking on the night when He was arrested said, “I am the Way, the Truth, and the Life; no man cometh unto the Father, but by Me” (Jn. 14:6).

A person who desires to have his sins forgiven cannot believe in Jesus and someone else, or Jesus and a body of religious tenets. Only faith in Jesus produces salvation. It is not that some religions do not have good practices, but salvation, as the Apostle Peter says, is only found in and through Jesus Christ. Belief in Jesus Christ is the only requirement for salvation. The teachings of Christ provide the foundation upon which Christianity is built. One cannot separate Jesus from His teachings.

A teacher may teach certain things that he himself is sometimes unable to obey. He is an imperfect human being who is subject to passions, prejudices or other handicaps that will prevent his thorough obedience at times, even to his own teachings. Jesus, however, was God residing in a human body, thus, He could perfectly obey all of His teachings.

In all other religions of the world there is a demand to perform various religious observances, rituals or ascetic practices to merit salvation. Only in Biblical Christianity is the truth taught that God has forever dealt with our sins. The price has been paid, the judgment executed; Jesus has died, and salvation is the gracious offer of God to all who will receive it.

One Baptism
Another distinctive of Christianity is the fact that each believer in the Lord Jesus has been indwelt by the Holy Spirit. Paul told the Ephesian Church that they were sealed with the Holy Spirit upon believing (Eph. 1:13), and he further added that the Holy Spirit, is the “earnest of our inheritance” (Eph. 1:14). The word “earnest” in the Greek conveys the idea of a down payment that one would make on a purchase. It is a pledge offered in a transaction to demonstrate genuine interest in the contract.

God has therefore given the Holy Spirit to every believer as His pledge and right to claim us. On the night of His arrest, Jesus promised His disciples that the Holy Spirit, who was presently dwelling with them, would subsequently be in them (Jn. 14:17). This was accomplished on the day of Pentecost when those present received the Holy Spirit – and every believer of the entire Church age was symbolically baptized into the name of Jesus Christ by the Holy Spirit (Acts 2; 1 Cor. 12:13).

Is it not a wonderful demonstration of grace on the part of God, that He has not only sent His Son to die for us, but He has given His Spirit to live within us? The Holy Spirit is the engagement ring God has given us clearly indicating his genuine desire to claim us for Himself in due time.

One Body
Another mysterious but wonderful truth is the fact that every believer, regardless of chronology, geography or station in life, has been cast into one body. Writing to the Ephesian church, Paul says, “There is one body” (Eph. 4:4). Paul amplifies this truth by telling the Corinthians that every believer is a member of the one body, just like a hand or foot is considered a particular member of a human body (1 Cor. 12:12-27).

The Lord Himself illustrated this mystery of His body when He instituted what is commonly referred to as the Lord’s Supper. He said the bread represented His body, which would be given as a sacrifice on the cross for our sins. But later Paul, in developing this truth added, “now you are the body of Christ” (1 Cor. 12:27). The loaf of bread is made up of individual grains of wheat, but when those individual grains are mixed together and heat is applied by baking the one loaf, the grains mysteriously join together so that they cannot be separated. They have become essentially “one body.”

One Authority
As one observes the religions of the world, one is struck by the organizational structure that has been established among them, just like large corporations or businesses. There are layers of persons, where one layer is superior to the layer below but subordinate to the one above. This pyramiding of authority, responsibility and privilege is universal in all the religions of the world. Sadly, many Christian groups have set up a similar structure, but the clear teaching of Scripture is that all believers are priests together.

The Lord Himself never set up some believers over others: “One is your master and you are all brethren” (Mt. 23:8). There were those who demonstrated their love and loyalty by drawing closer to Him and consequently were entrusted with greater responsibility. Peter, addressing the dispersed Christians in Asia, said that they were together a priesthood (1 Pet. 2:5,9). John wrote that we have been made “a kingdom of priests” (Rev. 1:6 NASB). In Revelation 5:10 even the four living creatures joined with the 24 elders in proclaiming the fact that all believers have been made a kingdom of priests.

Biblical Christianity teaches no hierarchical system of government. Scripture recognizes and teaches that there are different functions and offices so that the one who occupies an office, for example an elder, is entrusted with responsibility to lead and to guide. The word used for “rule” in the expression “them that have the rule over you” (Heb. 13:7,17) is one which conveys the idea of leading, not governing.

So here we see another unique feature of Christianity in that every believer is a priest to God. Therefore, each one of us can approach God without any intermediaries. Many who copy the world’s system by setting up a hierarchical structure grossly compromise this teaching of the priesthood of believers today.

These then are Christianity’s distinctives as I see them. May these truths continue to challenge our hearts and motivate us to faithfully serve our God.