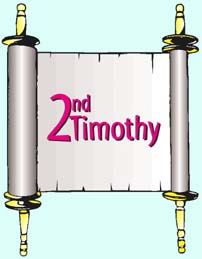 In the sports world, competition sometimes occurs between two entirely mismatched teams. If one team appears vastly superior in every way, the other could become demoralized before the game even begins. Some discouraged players might decide it’s not worth giving their best effort for the event. Why not just get the loss over with and go home to relax? That scenario is somewhat like the atmosphere surrounding Paul’s second letter to Timothy. There were plenty of reasons for Timothy to be anxious and discouraged. However, Paul wanted to be sure that Timothy would not become like those despairing athletes. The Lord had not changed! Paul’s stirring letter should cheer downhearted believers today, just as it was intended to strengthen his “beloved son” Timothy (2 Tim. 1:2 NKJV).

The Trouble Is Real
Paul’s previous letter had come during a time of activity and responsibility for Timothy. After Paul was released from prison, they evidently traveled together. Then, after leaving Timothy in Ephesus, Paul wrote to him with further counsel. Timothy had much to do at that time! It can be exciting to be actively involved in the Lord’s work, even if there are challenges.

Now, however, Paul was back in prison, expecting to be put to death soon. Timothy’s service in Ephesus* was apparently difficult, with many Christians becoming increasingly disinterested in knowing the truth. Further, society in general was becoming more self-centered and more strongly opposed to Christ. Timothy was susceptible to sadness (1:4), a lack of activity for the Lord (1:6), and embarrassment about Paul’s imprisonment (1:8).

Aren’t Christians today susceptible to the same things? We may feel sad about the lack of apparent results, afraid to continue our previous work for the Lord, or ashamed to be called Christians when others seem to have no use for Christ. It would be useless to pretend that these obstacles are not real. However, believers are exhorted to keep the faith despite the difficulties.

Notice that Paul, by the leading of the Spirit of God, knew what each situation required. He did not write another “First Timothy” style letter this time, giving many stern, straightforward guidelines for the Christian life. Instead, Paul wrote this second letter to reinvigorate Timothy himself (although clear Christian teaching is certainly present as well). The Word of God is still that rich for us today too. We can find exactly what we need. For stirring reminders about contending for the faith, read 1 Timothy. When we feel broken and discouraged, we should read 2 Timothy. And remember that God inspired both epistles and is ready to meet us where we are.

Keep On
The phrase “keep on” is one way to summarize 2 Timothy. Paul wants Timothy to persevere for the Lord. To this end, he first reminds Timothy of the spiritual foundation that had been laid in his life: Timothy’s mother and grandmother had been godly influences (1:5); he had known the Scriptures from his youth (3:15); he had become established in the faith through Paul’s mentoring (1:6, 13); he knew Paul’s doctrine and had seen his endurance, as well as the Lord’s faithfulness (3:10-11); God had spiritually gifted Timothy for the service he was doing (1:6, 14). In addition to these reminders, Paul mentions other believers who were still faithful, such as Onesiphorus and Mark (1:16; 4:11).

When we are discouraged or fearful in service, we can take the same approach: Look back to see how God has already worked in our lives; and look around to find others who are still faithful. Remembering what God has done and taking heart from others’ service can strengthen our feeble hands and knees, as Hebrews 12:12 says.

Paul builds on these observations as he describes specific situations in which Timothy must endure. We will do well to study these situations because, even if we aren’t facing them now, all faithful believers will probably face troubles similar to these at some point.

Hold Fast (1:13)
This is a key verse of chapter one. Paul mentions his own suffering in prison, yet he himself is not ashamed of his condition. Why? Because the gospel message was so glorious! Read the marvelous statement in verses 9-10, overflowing with the purpose and grace of God and the victory of Jesus Christ. Such a glorious Savior will certainly be able to maintain His servant (1:12).

It’s in this context that Paul instructs Timothy to hold on to a pattern, or outline, of sound words. This was even more necessary because “all those in Asia” had turned away from Paul (1:15), implying a growing disinterest in the doctrines Paul emphasized. (However, there were still faithful believers in Timothy’s time and later, as shown by the letters to the seven churches in Asia in Rev. 2-3.) The essential point is this: When we face rejection, we might be tempted to loosen our grip on doctrine. We can be refreshed in our commitment and our salvation once more as we meditate on the glory of Christ and His message.

Endure Hardship (2:3)
Serving Christ brings joy, but it is hardly ever – perhaps never – easy. Like a soldier, an athlete, and a farmer, Timothy would have to endure hardship and exhibit patience while waiting for results. Paul indicates two main purposes for enduring.

First, endurance was “for the sake of the elect” (2:10). As the Lord’s servants, we are privileged to help other believers make spiritual progress, guiding them by word and by example (2:14-15). Should we ourselves give up and thereby let others down?

Second, endurance was needed in order to recognize and address errors. Some should simply be avoided as time-wasters (2:16, 23). But other disputes were serious attacks on foundational truths of Christianity, such as the coming resurrection of believers who had died.

If Hymenaeus (2:17) is the same man as mentioned in 1 Timothy 1:20, then we can see that he has been busy recruiting new followers while promoting additional errors. These types of attacks must be corrected, though even this should be done with humility (2:24-26).

This type of endurance required Timothy to be very aware of those around him. He was to look for faithful men (2:2), and he also was to notice the situation in the “great house” where he was (2:20-22). Previously, in 1 Timothy 3:15, the Church had been called God’s own house, where truth had its rightful place. But now there was a mixture, so that some people in this great house were like honorable vessels while others were dishonorable. In anyone’s home, all the clean cups, bowls, and other vessels are stored separately from dirty ones. Otherwise, even the clean containers become soiled and are not serviceable to the master of the house. In the same way, Timothy was to cleanse himself from the company of dishonorable vessels, while at the same time seeking out those who “call on the Lord out of a pure heart.” This was not to be done with a holier-than-thou attitude, but with a simple concern for the Master’s pleasure, who would like to employ each of us as His useful and versatile servants.

Continue In (3:14)
Timothy needed further endurance simply because of the conditions of the world around. Perilous times were coming. Perhaps, when we read the catalog of characteristics in 2 Timothy 3:2-7, we would say that perilous times are already here in many ways. People who promote such attitudes will actually “resist the truth” (3:8). They are openly opposed to Christian teaching, even though they are often involved in supposedly spiritual endeavors. Spiritual-sounding words will lead us astray every time if those words deny the truth about Jesus Christ.

We can expect persecution if we refuse to give up the truth we have learned. However, the strength and supply of the Word of God is never outmatched by opposition (3:12-17). Without it, we are sure to fail; but with it, we are fully equipped for any work God has for us, despite the world’s darkness. This should clearly illustrate the importance of Bible study.

Fulfill Your Ministry (4:5)
Endurance for its own sake is not a very attractive goal. God does not ask us just to outlast our trouble; He wants us to keep active for Him. “Preach the Word!” Paul trumpets (4:2). Notice that this call to persevere is given in the context of the coming reign of the Lord Jesus Christ in His kingdom.

Further, we must persevere in His service because Christendom in general will become more and more complacent. “They will not endure sound doctrine” and will search out teachers who speak comfortably rather than truthfully (4:3-4). But Timothy could confront that flood of unbelief; he could “be watchful … endure … work … fulfill” (4:5).

A third reason for Timothy to fulfill his ministry was the sobering reality that Paul’s ministry would soon end. The time of his death was near. Paul had kept the faith, and soon would no longer be able to serve – but Timothy could.

We have these same motivations set before us. Paul’s view of the Lord’s kingdom has not yet come to pass, but it will. How much closer it must be today! Paul’s expectation of dark days for the Christian testimony has indeed come to pass. How much darker it may yet become! Since Paul’s time, many beloved servants of the Lord have followed him into death. How much opportunity there is to follow their faith in service! For all these reasons, we too should strive to fulfill the ministries the Lord has given us.

The closing verses of this letter are bittersweet. Paul was passing through the difficult experience of being alone. Some fellow-servants had become unfaithful; some were busy elsewhere; some were sick. It is touching to hear Paul repeatedly asking Timothy to diligently plan a trip to Rome (4:9,13,21). After reading such a letter, we cannot imagine Timothy still being ashamed of Paul’s chains.

Look Ahead
If the Lord’s work depended entirely on us, we would have every reason to be discouraged. We could never do enough in the short time of our lives on earth. However, God takes the long view of His work. If some were turning away from the faith, Timothy could still find a few faithful men, who would pass on the truth from one generation to the next. If there were troubles to endure for the present, Timothy could know that Christ’s kingdom would yet be established in righteousness. God always has a plan, and His plan is always best, so we, His servants, should continue on.

END NOTE
* We assume Timothy was still in Ephesus at the time of this epistle, as Paul told him to greet Onesiphorus, who lived in Ephesus (4:19; 1:18).

TAFJ Bible Seminary every Thursday from 5pm-8pm at R. Lagmay St., San Juan, M.Mla. Everyone needs to be equipped for the work of ministry. Every believer is a God-called, God-gifted, full-time minister (servant) of the Lord Jesus Christ. We are SAVED to SERVE!

Copyright © 2019 Trinitarian All For Jesus Ekklesia Of The Lord God, Inc. Powered by WordPress.com.