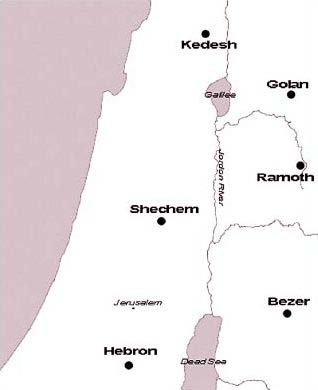 Christ, Our CITY OF REFUGE God, in His infinite wisdom, provided six cities of refuge, three on each side of the Jordan River, for the man who accidentally killed a person. As to those cities, He gave Moses very specific instructions that had to be followed fully if the offender was to be delivered from the avenger of blood. The Old Testament cities of refuge are gone, but Christ has become our “City of Refuge” today. The Cities Of Refuge God’s instructions for the cities of refuge are given in three places: Numbers 35:6-34, Deuteronomy 19:1-13, and Joshua 20:1-9. All of His requirements had to be met in order for a person to flee to one of those cities. In Numbers 35:15, God told Moses, “Six cities shall be for refuge for the children of Israel, for the stranger, and for the sojourner among them, that anyone who kills a person accidentally may flee there” (KJV). The congregation was to judge the manslayer and deliver him to the city of refuge (vv. 24-25). That person was to stay in the city until the death of the high priest; he was not to leave the city. If the manslayer did leave, he could be killed by the avenger. In all this, the LORD was clear that a murderer, one who did not kill a person accidentally, was to be put to death (vv. 30-31). Deuteronomy 19 reiterates that the cities were for situations involving accidental deaths (v. 4). The distance to the cities was to be limited with the way made known for the Israelite, the stranger, and the sojourner to be able to flee there quickly. This was a mercy of God. The portion in Joshua 20 identifies the three cities west of the Jordan (v. 7) as: Kedesh in Galilee, in the mountains of Naphtali, Shechem in the mountains of Ephraim, and Kirjath-arba (which is Hebron) in the mountains of Judah; and the three east of the Jordan (v. 8) being: Bezer, by Jericho eastward, in the wilderness of the plain, from the tribe of Reuben, Ramoth in Gilead, from the tribe of Gad, and Golan in Bashan, from the tribe of Manasseh. If the manslayers met God’s requirements, the elders were to take them into the safety of the city, out of the reach of the avenger. After the judgment by the congregation and the death of the high priest, the manslayer could return to his city and family in full restoration. Today’s believer does not have those six cities, but we have something greater: we have full refuge in our Lord and Savior Jesus Christ.

As To Salvation
The Lord Jesus Christ is the refuge from the wrath to come! We read “For God so loved the world that He gave His only begotten Son that whosoever believes in Him should not perish but have everlasting life (Jn. 3:16). Christ is the shelter; one who is saved “will not perish.” Despite God’s love to the world, those who are not in Christ will perish. The judgment of God against sinners is total separation from Himself. They will perish in the lake of fire. This is called the second death (Rev. 20:11-15). In fact, the wrath of God abides now on those who are outside of Christ (Jn. 3:36). This wrath will be fully experienced at the unbeliever’s death, ending up like the rich man in Luke 16:19-31 who died and found himself in torments, aware of his environment. Christ is our refuge for salvation. Romans 8:1 states, “There is therefore now no condemnation to those who are in Christ Jesus, who do not walk according to the flesh, but according to the Spirit.” The key preposition is “in.” Are you saved? Are you “in” Christ Jesus? Scripture also states, “Therefore if any man be in Christ, he is a new creation; old things are passed away; behold, all things have become new” (2 Cor. 5:17). There is salvation and new life for those who are “in Christ.” Today, a person must run to Christ just like those in the Old Testament ran to the cities of refuge.

As To Restoration
Discipleship follows salvation. The Lord Himself emphasized this thought, “Come unto Me, all you who labor and are heavy laden, and I will give you rest. Take My yoke upon you and learn from Me, for I am gentle and lowly in heart, and you will find rest for your souls. For My yoke is easy and My burden is light” (Mt. 11:28-30). The Christian, although imperfect and prone to mistakes, is saved; and Christ is his refuge. As with believers when they sin, it must have been a horrible feeling for an Israelite to accidentally take someone’s life. He probably had all kinds of emotions churning in him as he fled to that city of refuge. Sorrow was certainly one emotion as he hastened to safety, along with guilt, fear, and anguish. But he knew that he had to get into that city. Praise God, the Lord Jesus is also the city of refuge for restoration when the Christian fails. He will forgive and restore the repentant child of God. “If we confess our sins, He is faithful and just to forgive us our sins and to cleanse us from all unrighteousness” (1 Jn. 1:9). King David said, “He restores my soul” (Ps. 23:3).

The Lord has done so much to secure such a glorious future for us that we should not fail Him. Four beautiful expressions with the phrase “He is able” emphasize His ability to keep us if we rely on Him. They are: “But to Him that is able to do far exceedingly above all which we ask or think” (Eph. 3:20-21), “He is able to keep from stumbling” (Jude 24-25), “He is able to establish” (2 Cor. 1:21-22), and “He is also able to save to the uttermost those who come to God through Him” (Heb. 7:25). Nevertheless, if and when we fail, we can run to Christ, our city of refuge for restoration.

As To Protection
Finally, Jesus Christ is a refuge for protection. The Bible is replete with those who ran to Him for protection! One person who did so is David, who extolled the Lord on numerous occasions for His protective power.

Before we look at examples of our Lord as a refuge, a high tower, or a fortress, let us define the words refuge and refugee. The word “refuge” is a noun that means protection or shelter, as from danger or hardship. It also means a place providing protection or shelter; a source of help, relief and comfort in times of trouble. The noun “refugee” means one who flees in search of refuge, as in times of war. We are clearly the refugee seeking the Lord as our refuge! The world is full of challenges that force us to run to Christ for His protection. The Sons of Korah give us much encouragement in Psalm 46, such as the comforting, opening lines: “God is our refuge and strength, a very present help in trouble.” We are further comforted by Moses in Psalm 91, where he said, “He who dwells in the secret place of the Most High shall abide under the shadow of the Almighty. I will say of the Lord, He is my refuge and my fortress; My God, in Him will I trust” (vv. 1-2). It is noteworthy that the Sons of Korah and Moses were very personal in their expressions: our refuge – not a refuge, my fortress, my God, in Him will I trust. Praise the Lord.

Encouraged by the Scriptures, I will end on a personal note. The Lord suddenly called my mother home to be with Himself on November 25, 2011. She was a believer and was absent from the body and present with the Lord. I was responsible for her affairs because I am her oldest son. Although saddened by her death, I was comforted to know that she was with the Lord. But there was a lot of difficulty and darkness in the circumstances. I was overwhelmed! It was the High Priestly prayers of the Lord Jesus, and the prayers and encouragements from the saints and my immediate family that carried me through. I really needed His protection, and He provided it. Thus I can say with the Psalmist, “I will say of the Lord, He is my refuge and my fortress; My God, in Him will I trust.”

Conclusion
The cities of refuge are gone; they have been destroyed. Believers today, however, have a City of Refuge that is eternal, our Lord Jesus Christ. Just as the Old Testament saints could run to the nearest city of refuge, we can run to Him!