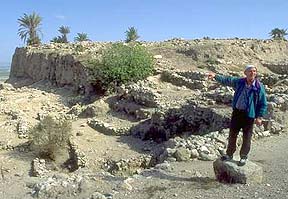 A LOOK AT THE BOOK OF HAGGAI Shuffling Priorities “I can’t help with the youth group this year. My job is too demanding.” “I don’t think I can make the meeting tonight. I’ve had a very busy day.” “I’ve got an important exam next week, so I’ll need to study this Sunday.”

Priorities! Priorities! Priorities! We face them every day of every week. We shuffle them around, and sometimes we get them misplaced. To every one of us the message of the prophet Haggai speaks loud and clear. “Consider your ways!” In other words, evaluate your priorities (Hag. 1:5,7 NKJV). Haggai was one of the early post-captivity prophets, and the five precisely-dated prophecies recorded in the Old Testament book which bear his name suggest that he might have kept a diary or journal. Maybe we should as well.

The Jews had been 70 years in captivity as punishment for failing to obey the commands outlined in Deuteronomy 28-30. God’s instructions there, with the clear predictions of what would happen if they failed to keep them, were later followed by Isaiah’s and Jeremiah’s stern prophesies of impending exile. But after a foreign policy change instituted by Persian King Darius, a decree was made that the Jews could return to their homeland and rebuild the temple. Some did, and their return is recorded in Ezra 1-3.

However, after a good beginning, when the temple foundations were laid, external opposition and internal dissension brought the work to a halt for about 14 years. With the drive to complete the temple losing impetus, the people began to pursue their own interests. Sound familiar? When we lose our passion for the Lord’s work, reaching out to bring others to a place of true worship, we soon get turned inward, self-centered, taken up with dissension, and ripe to experience God’s discipline on our lives.

The Rebuke
It is tempting to say “the time is not right” when some challenging service for the Lord is suggested. “I’m too busy.” “I don’t have enough energy.” “I lack the necessary gifts or abilities.” “I’m too young (or old).” That’s exactly what happened here (Hag. 1:2). The people started to give reasons why they hadn’t pressed on to complete the temple. But they were really excuses, not valid reasons. The fact was that they had plenty of time and money to work on their own houses – no doubt paneled with expensive timber imported from Lebanon – but couldn’t find the time or money to work on the Lord’s house.

The Lord’s call through the prophet was to reevaluate their priorities. They were not putting God first. They were putting Him second, after their own earthly comforts. This led to some very unsatisfying experiences (Hag. 1:6).

Self-centered lives still lead to such unsatisfying experiences. We can readily identify with the reluctant Jews here. Abundant food and drink, expensive clothing, and general affluence by themselves do not bring happiness when they become major preoccupations of our lives.

The Reminder
Haggai brings the people a reminder in the form of a call to action: “Consider your ways!” Get on with the job. The glory of Jehovah is at stake: “‘That I may … be glorified,’ says the Lord” (Hag. 1:7-8). To please God and to worship Him alone should be their priority, and it should be ours as well. The temple was the place where God was pleased to dwell among His earthly people, and if the temple was in ruins, so was their testimony.

The apostle Paul needed to give the Christians in Corinth a similar reminder: “Do you not know that your body is the temple of the Holy Spirit who is in you, whom you have from God, and you are not your own? For you were bought at a price; therefore glorify God in your body and in your spirit, which are God’s” (1 Cor. 6:19-20). This is a call to individual responsibility. Earlier he reminded them of their collective responsibility: “Do you not know that you are the temple of God and that the Spirit of God dwells in you?” (1 Cor. 3:16).

Both individually and collectively, Christians have a responsibility to live lives which demonstrate the holiness and glory of God. We need to glorify Him. Failure to do this brought God’s discipline on His earthly people, the Jewish nation. National disasters were the result (Hag. 1:10-11). Here it doesn’t just say that God allowed these things to happen – He actually called for them. This was in direct fulfillment of the instructions given in Deuteronomy 28-30, where the blessings and cursings dependent on keeping His earthly covenant were spelled out in detail.

This of course raises the question of whether national disasters today can be interpreted in a similar way, as punishment. We need to be clear that sometimes they may be, but we should not assume that this is always so. Most definitely we should not let it become an excuse for failing to help those in need. The tremendous “tsunami of giving” to those whose lives were devastated by the massive ocean tsunami which struck Indonesia, Sri Lanka, and India just after Christmas Day in 2004 is a case in point. Not all sickness and calamity is the result of individual or national sin. It could be simply that we all – Christians and non-Christians alike – live in a fallen world. But it should make us stop, think and evaluate our priorities, to make sure they are not misplaced.

The Response
Haggai’s message touched a raw nerve, which the Word of God often does if we really listen to it. The Jews realized that it was indeed from God Himself, and they proceeded to obey it promptly (Hag. 1:12). They recognized both its origin and its authority. So it must be with us. Realizing that God is speaking, even through a human agent, is the first step in reordering our priorities.

Once these are sorted out, worship naturally follows: “The people feared the presence of the Lord” (Hag. 1:12). For us, worship is not so much in the nature of fear, but rather in a sense of awe and reverence. We are in touch with the God of majesty and might, who deserves our supreme attention and awareness. For us He is not a distant God – somewhere in outer space – but a God who is with us, and who wants to be known, loved and obeyed. He is One who looks for our response, and desires to enjoy fellowship with us. It is true that our Lord will always be with His own. He has said, “I will never leave you nor forsake you” (Heb. 13:5), but true lasting fellowship depends on obedience to His will. Impoverished fellowship may be one of the results of poor priority setting.

The Jewish remnant in the time of Haggai then set to work to continue rebuilding the temple, with their spirits stirred up by the knowledge that the Lord was indeed with them in the task (Hag. 1:14). One of the functions of prophetic ministry in a local New Testament church is to exhort or “stir up” the believers who worship there (1 Cor. 14:3), and this is exactly what Haggai did more than 500 years before the birth of Christ.

We need “stirrers” of this sort today, men and women of God – like Zerubbabel the governor and Joshua the High Priest – who sense God’s will clearly and encourage others to follow it. “So the Lord stirred up the spirit of Zerubbabel … and the spirit of Joshua … and the spirit of all the remnant of the people; and they came and worked on the house of the Lord of hosts, their God” (Hag. 1:14).

Note the words “all” and “they.” The Lord wants all His redeemed people to engage in the task of building for Him, not just a faithful few. The Christian life is not one lived in isolation; it is worked out in fellowship with God and with each other. That is the reason for the encouragement in Hebrews 10:24-25: “Let us consider one another in order to stir up love and good works, not forsaking the assembling of ourselves together, as is the manner of some, but exhorting one another, and so much more as you see the Day (of the Lord’s return) approaching.”

Let’s shuffle our priorities again, and in our evaluation make sure that the Lord’s interests come to the top of the list!