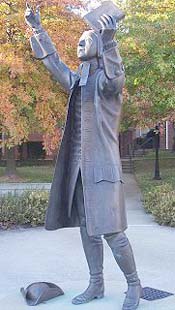 How JOHN WESLEY Was Saved “If you confess with your mouth the Lord Jesus, and believe in your heart that God has raised Him from the dead, you will be saved. For with the heart one believes unto righteousness, and with the mouth confession is made unto salvation.” Romans 10:9-10 NKJV

Recently we visited historic Savannah, Georgia. In a city park, five memorial plaques record how John Wesley first labored there as a missionary from 1735-1738. But another plaque told a most important fact about those years, saying that Wesley was “helped” by Moravian missionaries. How did they help? Shortly after his return to England in 1738, Wesley wrote: “I left my native country to teach the Georgian Indians the nature of Christianity. But what have I learned myself in the meantime? That I, who went to America to convert others, was never myself converted to God.” The Moravians helped Wesley by pointing out that even though he knew the Bible and worked harder than any other missionary, he was laboring for God without having the peace of God.

When he returned to England, he met with Peter Bohler, a Moravian who helped him study Romans, using Martin Luther’s Preface to Romans as a guide. Wesley was listening to a reading of Romans 10 when he found the peace which comes with salvation. He wrote this about his conversion: “I finally trusted in Christ alone for my salvation, and an assurance was given me that He had taken away my sins and saved me from the law of sin and death.”

Earlier Wesley had written that he wanted the faith which enables one to say, “It is no longer I who live, but Christ lives in me; and the life which I now live in the flesh I live by faith in the Son of God, who loved me and gave Himself for me” (Gal. 2:20). He found that faith and went on to become one of the world’s most renowned evangelists, preaching the truth that we are saved by God’s grace alone, not by our works.