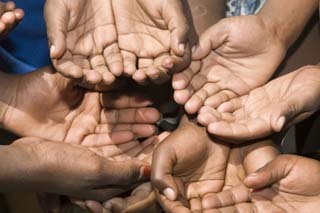 A LOOK AT ROMANS 12 Three Aspects Of Christian Service “In spirit fervent, serving the Lord. As regards hope, rejoicing; as regards tribulation, enduring; as regards prayer, persevering; distributing to the necessities of the saints; given to hospitality.” Romans 12:11-13 JND

Romans 12 is filled with the most timely injunctions toward wholesome Christian behavior. The words in verse 11, “serving the Lord,” perhaps set before us a keynote of the entire chapter. It is that everything performed by the Christian should have the Lord and His interests and His honor as the great objective. Three different Greek words for service are used in this chapter.

In Spirit … Serving
The first is in verse 1, where the apostle is telling us we should offer up our bodies a living sacrifice, “which is your intelligent service.” That word “service” is the word latreuo, and it means the reverential service of homage or worship. In our English word “devotion” we have its near equivalent; the heart is captivated by the object of the One to whom we render all we are and have. It is expressed in one way in the adoration of worship, but in Romans 12:1 it is the constant offering of “a living sacrifice” of a life devoted to the Lord, ascending to Him as a sweet-smelling savor. In verse 7 we have another word for service, and here Paul is enjoining those who serve “to occupy ourselves in service.” The word here is diakoneo, and it refers to a servant who has been appointed. There is an official character to it, and the exhortation is that those who take an official place of service among the Lord’s people, such as shepherds, overseers, deacons or in any other public capacity, should do so with constancy and diligence. The Greek word for service in verse 11 is douleuo, and it has the intensive meaning of slavery or bondage.

Thus we have the complete picture of the entire life of service on the part of a Christian towards his Lord. In verse 1, it is that our bodies are offered up a living sacrifice, an act of worshipful adoration going up before God as a sweet-smelling savor. In verse 7 it is the person who takes an office of service among the Lord’s people. Whatever his office may be, an overseer, deacon, shepherd, or helper, he should make that his job. If he is a shepherd doing things in obscurity, let him not seek a more prominent place. Then in verse 11, it is that we should be bondmen to the Lord. Just as a bondslave, captivated by the loving-kindness of his master, performs devoted service beyond the call of duty, so the Christian will fervently serve the Lord.

With these three aspects of service one would think there must be very little time to do other things – such as earning a living, cleaning the kitchen, or doing other necessary work. The strange part is that every task can be performed “as to the Lord” (Col. 3:23), so the commonplace duties of life take on an aspect of worship, of willing duty and of Christian bondage. This turns menial tasks into a series of adventures done for our Master, the Lord Jesus, whose eye is constantly upon us and who appreciates everything we do, if it is done for Him.

Rejoicing … Enduring … Persevering
In verse 12, Paul writes, “as regards hope, rejoicing.” In a drab and pessimistic world like the one in which we live today, rejoicing in hope becomes a refreshing occupation on the part of the Lord’s people. The day is never so dark but the sunlight of the promise of the coming again of the Lord Jesus sheds its gladdening rays into the deepest gloom. Then Paul says, “as regards tribulation, enduring.” Endurance is more than patience. Patience is waiting until the storm is over, but endurance gives stamina to the one passing through tribulation. Then he says, “as regards prayer, persevering.” Surely this touches all of us. We are living in a time when prayer is largely a formality, and few realize the importance of it. But the soul that senses its need for God cries out to the Lord for His intervention. Prayer is not vain repetitions, but a pleading with the Lord, as Abraham pled with Jehovah on behalf of Sodom. Every Christian should be an intercessor. We are living in an age of many burdens, not only upon our own hearts, but upon the hearts of many others, and perseverance in prayer is a privilege in the Christian life. “The fervent prayer of the righteous man has much power” (Jas. 5:16). Had Elijah not persevered in prayer, many thousands would have died of starvation on account of the drought. But Elijah prayed perseveringly and the rains came. Perhaps we are not seeing showers of spiritual blessing because of our lack of persevering prayer.

Distributing To … The Saints
Then Paul says, “distributing to the necessities of the saints, given to hospitality.” There is much need on every hand today, perhaps more than at any other time in the world. The Christian is under definite obligation to be kind, and those of the household of faith have first claim upon his kindness. There are many Christians across the world who are suffering from starvation. I know that many believers are doing their utmost to send food and clothing to them, but many, on the other hand, are going their own selfish way, forgetting their obligation.

Nor is all the suffering overseas either, for there is much need around us, if we will only look for it. Perhaps the crying need of the world at this hour is for loving-kindness. This ministry of distributing to the necessities of the saints is a very challenging thought to every Christian. My heart, my home, my money, should rightfully be at the Lord’s disposal, and the poor and needy have the first claim upon it.

Service, then, should be offered first as an act of worship to the Lord. Next, it should be done with all the dignity and honor of our official calling. Finally, that service must be rendered with all the devotion of a willing bondslave.