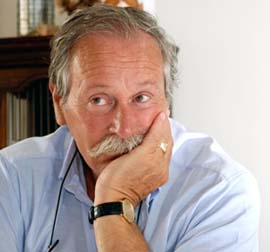 Dealing With Doubts Thomas said to them, “Unless I see the nail marks in His hands and put my fingers where the nails were, and put my hand into His side, I will not believe it.” John 20:25 NIV When the men came to Jesus, they said, “John the Baptist sent us to You to ask, ‘Are You the one who was to come, or should we expect someone else?’” Luke 7:20 Then Peter got down out of the boat, walked on the water and came toward Jesus. But when he saw the wind, he was afraid and, beginning to sink, cried out, “Lord, save me!” Matthew 14:29-30

How do you deal with your doubts about the Christian faith? You say you don’t have any? Never? Well, it’s great if you can say that, but most of us growing Christians must confess that a few doubts do harass us every now and then. In fact, some Christians are so loaded down with doubts that they hardly ever get a chance to rejoice in their salvation. Is there any solution to the problem of doubts in the Christian life? Yes! The Bible is sufficient for all we need to know to live a godly life (2 Tim. 3:16-17). The Bible gives the answers for dealing with doubts.

Basically, the biblical solution to doubts is more faith. Ephesians 6:16 says that with “the shield of faith … you can extinguish all the flaming arrows of the evil one.” Doubts are one of those flaming arrows. They are part of the strategy of Satan to keep the Christian off balance, afraid and discouraged. Increased faith is the key to dealing with doubts – it is a protective shield which keeps doubts from getting to us. More faith does not mean psyching ourselves up, or kissing our brains goodbye, or some other type of subjective mental gymnastics. No, it means looking more to, trusting more in, and depending more on Jesus. A little child on his first trip to the big city with his father may be bombarded with doubts and fears. They are not dispelled by some kind of subjective thinking, but by placing his little hand in the firm grip of his father’s big hand.

The Scriptures quoted above are excerpts from three accounts in the Gospels where the Lord Jesus deals with His followers’ doubts. God has included these accounts – concerning Thomas, John the Baptist and Peter – in His Word so that we may learn what to do about doubts. In each case there is a principle given to us for dealing with doubts. When these principles are applied, faith will increase and doubts will decrease.

Doubting Thomas (John 20:19-29)
Thomas is an example of a Christian who has doubts because he doesn’t have enough tangible evidence of God. Unless I can “see and touch” (20:25) is an unreasonable attitude for a Christian, and it does not bring the blessing of the Lord (20:29). Thomas was not with the other disciples when Jesus came (20:24). We don’t know whether it was because of fear, lack of interest or business, but there’s a lesson here for us. If we don’t get together with other Christians for fellowship, study and prayer, it won’t be long before doubts come our way. We are not immune from doubts concerning the fundamentals of the faith. Thomas doubted the resurrection of Jesus. He had his doubts dispelled, but not before he was back where he belonged – with the other Christians.

The principle of increasing faith and decreasing doubts in this account is that we must stay in fellowship with our brothers and sisters in Christ. One of the great truths of the New Testament is embodied in our Lord’s words: “Where two or three come together in My name, there am I with them” (Mt. 18:20). There is nothing that will dispel our doubts more quickly than the presence of the Lord. Although Thomas had the unique privilege of physically seeing the resurrected Christ “with them” (20:26), the Lord assures us that this is unnecessary (20:29). Jesus continues to dwell in the midst of His people by His Spirit today (Eph. 2:22). No wonder we are told not to “give up meeting together” (Heb. 10:25). The Christian “hermit” is more prone to doubts than the Christian who is enjoying the Lord’s presence in the midst of His people.

John The Baptist (Luke 7:18-23)
In John the Baptist we have an example of a Christian who has doubts because he can’t quite figure out what God is doing. John was in prison (Mt. 11:2) and he couldn’t understand why Jesus – the Messiah whose coming he had announced – wasn’t moving a little faster to set things straight. Why was evil Herod still on the throne and ungodly Rome still in control of the land of Israel? Why was John sitting around in prison where he couldn’t be effective? No wonder he sent this question to Jesus: “Are you the one who was to come, or should we expect someone else?” (Lk. 7:18). John was not denying the Lord or giving up the faith. He was questioning what he couldn’t understand. The word “doubt” does not necessarily imply denial; it can also mean to question. But intellectual questions should be approached in such a way that they will not make us stumble in our relationship with the Lord (7:23).

The Scriptural approach to hard questions is to take them to the Lord. To speculate apart from prayer is to question God rather than ask Him, and that’s the wrong approach. Praying is not a cop-out; it is an acknowledgement of our dependence on the One who has all the answers. John the Baptist had a hard question so he sent it directly to the Lord and waited. The Lord answered John by pointing him to the Scriptures. John the Baptist knew the Old Testament prophecies well. All Jesus did was show John that the prophecies of Isaiah concerning the coming Messiah were being fulfilled (Isa. 35:5-6). John was not delivered from prison; he was beheaded there. But God’s Word was sufficient to answer his doubts. The Lord often uses His Word to answer our intellectual doubts. Here then is another principle for dealing with doubts – lay them out before the Lord in prayer and wait for His answer from His Word.

Peter (Matthew 14:22-33)
In the case of Peter walking on water we have an example of a Christian who has doubts because the situation seems to be impossible, even for God. Throughout this account we have a picture of the walk of faith to which our Lord calls us (14:29) across the troubled and contrary “sea of life.” Peter began to sink because he took his eyes off the Lord to look at the storm. It was at this point that his faith ebbed and he began to doubt (14:30). Looking at the contrary winds and waves of this life will always bring discouragement and fear. The protective shield of faith is lowered, and doubts concerning the Lord’s ability zero in. The only cure for these doubts is to get our eyes back on the Lord in complete dependence, as Peter was forced to do (14:30).

The principle of dealing with doubts that comes from this account is not just “Keep your eyes on the Lord,” but “Be in a place where you must keep your eyes on the Lord.” The other disciples were safe in the boat and not in a position to experience the removal of doubts in the same way Peter did. Although Peter experienced “sinking,” he also experienced “walking on water.” It is only as we “risk” walking by faith rather than sight that doubts concerning the Lord’s ability to handle the “impossible” situations are removed. Have you ever been in a situation where you had to cry out, “Lord, save me!” (14:30)? To see and experience the Lord’s power in those situations is to have doubts removed. Maybe the Lord wants you to serve in some special way. Are you holding back because you are clinging to the safety of a “boat”? The outstretched hand of the living Lord is ready to take hold of you and increase your faith (14:31).

These examples show us that doubts are not uncommon to followers of the Lord. So let’s not be surprised if occasionally we find ourselves acting like Thomas, John the Baptist and Peter. The Lord does not praise this position. In fact, in each case there is a mild rebuke directed at the doubter (Mt. 14:31; Lk. 7:23; Jn. 20:29). The Lord does not want us to flounder in doubts but He expects us to deal with them according to the principles He has included in His Word.