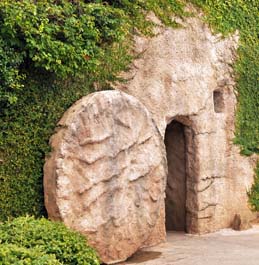 Back From The Dead

Before launching its new scheme called “Get Paid As You Go” for British customers, Virgin Mobile cell phone company conducted a survey. One question people were asked was, “Who do you wish you could bring back from the dead?” Topping the list after the survey was conducted was Princess Diana, who died tragically in a car crash in Paris in August 1997. Following her were Marilyn Monroe, Elvis Presley, John Lennon and George Harrison. Surprisingly, even in Liverpool (home city of former Beatle John Lennon) Princess Diana was the people’s number one choice. In sixth place overall came Jesus Christ. Surveys of this kind can demonstrate the popularity of celebrities, but any such wish is vain. Those who have died cannot be brought back from the grave to be seen and admired again in society.

But many who took part in the survey made a glaring error, because one among the top ten was very different from all the rest. He has already come back from the dead!

It is a big mistake to put Jesus Christ on a par with other great people. He stands far above the rest. Those who knew Him well when He lived on earth were convinced that He was “the Son of the Living God” (Mt. 16:16 niv). Completely sinless (1 Jn. 3:5), Christ came to earth to die for sinners – and that means us.

His death was not an accident, nor was it premature. He willingly laid down His life for us after bearing in His own body God’s righteous punishment for sin (1 Pet. 2:24).

In vain voters wished to bring back their favorite celebrity from the dead. But to want to bring Christ back from the dead is a wish too late. Jesus Christ, who voluntarily laid down His life, had the authority to take it again (Jn. 10:18). Within three days of His death He reappeared in human form on earth, and on one occasion was seen by more than 500 eyewitnesses (1 Cor. 15:6).

Don’t wish for something that has already happened! Rather, recognize that “this same Jesus” is coming again from heaven (Acts 1:11). We shall all meet Him one day – but will it be as our Savior or as our Judge?

Call upon Him while He is near. Forsake your sinful ways which will lead you to Hell, and turn to the Lord who alone can pardon you (Isa. 55:7).