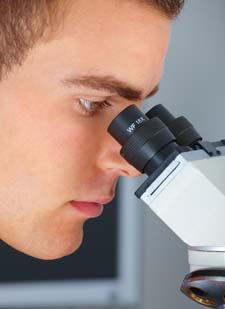 PSALM 8 God’s Glory In Creation Have you ever marveled at the amazing display of stars on a clear night? Years ago on a backpacking trip, our family slept outdoors without a tent, high in the Rocky Mountains. There, far away from the bright lights of civilization, the display of stars was breathtaking! How small we felt in such an awesome universe! The words of Psalm 8 (on the preceding page) came to mind as we gazed up at the sky. If you ever feel like you’re just a dot in the vast universe, meditate on Psalm 8. No doubt David, its author, had the same feelings of awe and “smallness” when he looked up at the heavens. But the Lord revealed to him that from God’s perspective people are much more than mere specks in a vast universe! Apart from the revelation of Scripture we would never know that we are more than mere specks of dust among the stars. However, the Bible says that we are of great significance to God! Psalm 8 gives us our Creator’s divine perspective.

A Hymn Of Praise Psalm 8 is a hymn of praise to God for His marvelous works of creation and His wonderful plans for mankind. Take a look at the title of this psalm. It is a psalm of David, and because it is written “for the director of music,” it is also a hymn of praise. “On the gittith” may refer to a musical instrument that was used to accompany this hymn, or it may refer to a tune that had some connection with the town of Gath. Gath was one of the five major Philistine cities, and was the hometown of the giant Goliath. Some Bible scholars have suggested, because of verse 2, that David may have been thinking of his victory over Goliath when he wrote this psalm – that is, when God used young David’s simple words and small slingshot to “silence the foe and the avenger” (8:2).

A Messianic Psalm
In addition to being a hymn of praise for God’s marvelous works of creation and His great plans for mankind, Psalm 8 is also clearly a Messianic psalm. It is quoted three times in the New Testament, each time in reference to Jesus.

First, in Matthew 21:12-16, the Lord was in the temple courts after His triumphal entrance into Jerusalem. When the Jewish leaders rebuked Him for allowing the children to praise Him by saying “Hosanna to the Son of David,” Jesus quoted Psalm 8:2: “From the lips of infants and children You have ordained praise.”

Then the apostle Paul quoted Psalm 8:6 in 1 Corinthians 15:27, when he wrote, “He has put everything under His feet,” referring to Jesus.

The third quote from Psalm 8:5-6 is in Hebrews 2:6-8, where the author of Hebrews shows that, even though He is Man, the Lord Jesus is greater than the angels: “What is man that You are mindful of him, and the son of man that You care for him? You made him a little lower than the angels; You crowned him with glory and honor and put everything under his feet.” In quoting Psalm 8:5, the author uses “lower than angels,” while some translations of Psalm 8:5 (NASB, AMP, RSV, ASV) read “lower than God.” The Hebrew word used in Psalm 8:5 is elohim, which can be translated “God” or “gods” or “angels.” The Greek translation of the Old Testament (the Septuagint) translates this phrase as “lower than angels,” and that is the version quoted by the author of Hebrews. When a New Testament author, under the inspiration of the Holy Spirit, quotes from the Septuagint, it is a good indication for us that this is the text and translation to follow. Thus we would read Psalm 8:5 as, “You made Him a little lower than the angels.”

Does it mean that man was made a little lower than the angels? Mankind was created in the image of God (Gen. 1:27), but at the present time he is subjected to limitations that don’t pertain to angels. The law of gravity, for example, does not limit angels in their travels and ministry, and of course angels don’t get sick and die as people do!

The author of Hebrews was making the point that the eternal Son of God became true Man at the Incarnation. As man, He became “lower than the angels.” He willingly subjected Himself to the limitations of being human for the purpose of accomplishing the work of redemption. However, at no time was Christ inferior to angels. The eternal Son of God was and is and ever will be greater than the angels. Even though He became man, he remained fully God, and He remains fully man and fully God – forever!

The LORD, Majestic In Creation
All of us have looked up into the sky on a clear night and marvelled at God’s majestic creation. David spent many starry nights out on the Judean hillsides near Bethlehem while watching his family’s sheep. He was probably reflecting on those experiences when he wrote verses 3-4. Most likely David was not aware of the concept of “light years” as we are today, and thus our sense of awe at God’s creation should be even greater than David’s as we gaze at the innumerable stars – many of which are actually entire galaxies! Notice that the heavens are described as the work of God’s “fingers.” Wow! We have a big God!

How can intelligent people conclude that the universe created itself out of nothing? Even little children know that things don’t just create themselves out of nothing! How can people believe and propagate the notion that the amazing amount of intricate design in this universe just came about by chance, after some kind of “big bang”? Seriously, people have to be willfully blind to deny that there is a powerful, awesome Designer and Creator behind this universe.

The LORD, Marvelous In His Plans
Did you ever see a picture of the universe with a “You are Here” arrow showing the location of the earth, a tiny dot on the fringes of the universe? From the human perspective, we’re just a speck of dust on a speck of a planet in a galaxy containing billions of stars that are larger than our sun. And our galaxy is just one of billions of galaxies!

When we consider the mind-boggling immensity of the universe, we can certainly identify with David’s question in verses 3-4: “When I consider the heavens, the work of Your fingers, the moon and the stars which You have set in place, what is man that You are mindful of him, and the son of man that You care for him?” The answer to this question is that from God’s perspective, mankind is very significant and important. We have been created in the image of God, “and crowned … with glory and honor” (8:5).

Mankind was given dominion over the other works of God’s creation, including animals. The meaning of the word “dominion” has sometimes been twisted to justify mankind’s sinful exploitation of the earth and its creatures for his own greedy purposes. We don’t have the right to pollute and abuse the environment, to mistreat and exploit animal life, or to destroy anything that God has created. God has honored mankind with the responsibility to care for, protect and enjoy His handiwork (8:6-8; Gen. 2:8-9,15).

Unfortunately, since sin entered the world, mankind has not cared for this earth as God intended. However, when the Perfect Man returns to earth in power and glory, all things will be “put under His feet.” Every wrong will be corrected and everything set right. The “first Adam” failed, but the “Last Adam,” our Lord Himself, will show forth all that God intended for mankind on this earth (1 Cor. 15:45). All believers will share in the glorious reign of Christ on earth, when all things will be subject to Him. At that time we will certainly sing, “Oh Lord, our Lord, how majestic is Your Name in all the earth!”

Remember This Example
If you are ever bothered by how small you feel in this vast universe, remember this illustration. Think of a powerful and wealthy businessman with holdings and interests all over the world. He travels the globe in his private jet, meets with world leaders and is involved in international negotiations that affect the world economy and global politics.

Now think of a little baby in a small town far away from these important international meetings, transactions and travels of the businessman. The small baby in the little town is such a tiny and insignificant person compared to the vast world of the important businessman – except for one fact! That baby is the businessman’s baby, his pride and joy! No matter where that businessman travels, and no matter what major global concerns he undertakes, his loving thoughts and care are constantly with his precious child in that tiny town.

Do you see the point of this illustration? No matter how small or valueless you may feel at times, you are never insignificant to your heavenly Father! You may live on a tiny planet in a huge universe, but you are one of His children, His pride and joy, His most precious possession! His thoughts are constantly with you. You are always in His care.

I encourage you to memorize Psalm 8, and the next time you are feeling small, recite it and remember the businessman and his baby!