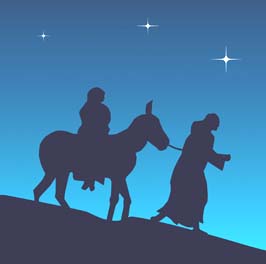 The Implications Of MICAH 5:2 “But thou, Bethlehem Ephratah, Though thou be little among the thousands of Judah, Yet out of thee shall He come forth unto Me That is to be Ruler in Israel; Whose goings forth have been from of old, From everlasting.” Micah 5:2 KJV

Famous In Bethlehem Micah’s prophecy comprises more than 3,000 words in seven chapters. While other Feature writers may address his prophecy in general, I will restrict my remarks to the implications of one verse – Micah 5:2. This classic quotation has the honor of being quoted in the Gospel of Matthew: “And thou Bethlehem, in the land of Judah, art not the least among the princes of Judah; for out of thee shall come a Governor, that shall rule My people, Israel” (Mt. 2:6).

The First And Last
Today Bethlehem is visited by those who thank God for His Son. And on the way to the city travelers pass Rachel’s tomb which is sacred to the Jew. Micah 5:2 is the last reference to Bethlehem among the prophets of the Old Testament. The next mention is the fulfillment of the prophecy! Thus the divine comment in Matthew confirms, “Now when Jesus was born in Bethlehem of Judea in the days of Herod the king, behold, there came wise men from the east to Jerusalem” (Mt. 2:1). However, this last reference in the Old Testament (Mic. 5:2) is in sharp contrast to the first, which registers the death of Rachel, the wife of Jacob, who died giving birth to Benjamin (Gen. 35:18-19), whose name in Hebrew means “son of my right hand.” How could it be otherwise when the prophet says of the One to be born at Bethlehem, “whose goings forth have been from of old, from everlasting” (Mic. 5:2)?

The Son of God stepped out of eternity when He became the Babe of Bethlehem (Mt. 2:1). However Bethlehem’s having been associated initially with death (Rachel’s), the sword of Herod would go through the city in the massacre of the innocents. All the children two years old and under were murdered in Herod’s attempt to kill the King of the Jews. And so Jeremiah also prophesied, “In Rama was there a voice heard, lamentation, and weeping, and great mourning, Rachel weeping for her children, and would not be comforted, because they are not” (Mt. 2:18; Jer. 31:15). By this means Bethlehem Judah is associated with both joy and sorrow (Jud. 17:7).

House Of Bread
This small city also loomed large during the days of the Judges. As such it attained prominence in the Book of Ruth where it is mentioned five times. In Hebrew it means “house of bread.” From Bethlehem there came forth the One who later declared, “I am that bread of life … This is the bread which cometh down from heaven, that a man may eat thereof, and not die” (Jn. 6:48-50).

We notice also that the prophet is specific about the location of Bethlehem. It is in Judah, hence also in Ruth 1:1 it is named Bethlehem Judah. This is to distinguish it from the second Bethlehem sited in the inheritance of Zebulon (Josh. 19:15). The latter is reckoned by scholars to have been a city which lay seven miles northwest of Nazareth. The difference between these two was well established in ancient times. For when the people disputed about the identity of the Lord they noted, “Hath not the Scripture said that Christ cometh of the seed of David, and out of the town of Bethlehem, where David was?” (Jn. 7:42). In other words, the doubters were wrongly contending that the Lord’s association with Nazareth was a disqualification.

They were ignorant of the virgin birth at Bethlehem, even though their own prophet had proclaimed: “The land of Zebulon, and the land of Naphtali … beyond the Jordan, Galilee of the Gentiles; the people who sat in darkness saw great light, and to them who sat in the region and shadow of death, light is sprung up” (Isa. 9:1-2; Mt. 4:15-16). These verses refute the priests’ objections that “out of Galilee ariseth no prophet” (Jn. 7:52; 2 Ki. 14:25).

In any event those traveling today from Jerusalem to Bethlehem must pass Rachel’s tomb which remains authenticated to this day. But by a strange providence, we never read of the Christ re-visiting His birthplace. Was it still the case that 30 years later there remained no room for Him at the inn (Lk. 2:7)?

Little Town Of Bethlehem
From all this we see that the hymn “O Little Town of Bethlehem” is soundly based on Micah’s observation that the place was “not the least among the princes of Judah.” It was small in area, but not in spiritual stature. Its importance would be inversely proportional to its acreage in that the One born king would begin His human life there. This fact was well known to the Jews for they were able to advise Herod of it when he demanded to know where the Christ should be born (Mt. 2:4). It is also identified as “the city of David” (Lk. 2:11). We know Ruth gave birth to Obed in Bethlehem, and that he was “the father of Jesse, the father of David” (Ruth 4:17). But if this bestowed fame upon the city, it was not to be compared to the greater glory of its association with the Son of God. For David himself was to confess his inferiority to the One whom God described as His Begotten Son (Ps. 2:7).

King Of Kings
Psalm 2 reveals the universal sway of the One seated at the right hand of God (2:8). The King born at Bethlehem would not only be the “ruler in Israel” but in due time He would be seen as “the King of kings, and Lord of lords” (1 Tim. 6:15; Rev. 17:14). Paul confirms that Jesus will rule in heaven, on earth and over hell (Phil. 2:10). This objective will be achieved in stages. Even now He has “gone into heaven, and is on the right hand of God; angels and authorities and powers being made subject unto Him” (1 Pet. 4:22).

However Micah also foretells of a day when the Lord will come from heaven to earth that He may establish His universal sway over Israel and the nations. Micah proclaims “For, behold, the Lord cometh forth out of His place, and will come down, and tread upon the high places of the earth” (Mic. 1:3). The day is coming when He shall return, splitting the Mount of Olives (Zech. 14:4). Then He shall re-enter Jerusalem to be enthroned as priest in the rebuilt temple and He shall rule in glory (Zech. 6:13). And the psalmist declares that “He shall have dominion also from sea to sea, and … unto the ends of the earth” (Ps. 72:8).

If He who rules in heaven shall later rule on the earth, so also He who has “the keys of hell and of death” (Rev. 1:18) will subdue the underworld. First, Satan must be imprisoned in the Abyss. But at the end of the Millennium the Son of God will empty hell and cast it into the lake of fire “which is the second death” (Rev. 21:8). In these progressive stages He will subdue the “things in heaven, and things in earth, and things under the earth” (Phil. 2:10). It was little thought that such things would be when Mary “brought forth her firstborn son, and wrapped him in swaddling clothes, and laid him in a manger, because there was no room for them in the inn” (Lk. 2:7).

Universal Subjection
Most people do not realize that God has decreed “that every knee should bow” to Christ (Phil. 2:10). This is no mere ideal, “For He must reign, till He hath put all enemies under His feet” (1 Cor. 15:25). Christ is invincible; those who refuse to convert will be humiliated. So Micah himself declares, “They shall lick the dust like a serpent, they shall move out of their holes like worms of the earth: they shall be afraid of the Lord our God, and shall fear because of Thee” (Mic. 7:17; Ps. 72:9). Micah 7:17 confirms another truth concerning the promised Ruler – the restoration of Israel. The Son of God as the Son of David will rule over Israel and all the nations (Ps. 2:8; 89:27). In parallel with these truths, the people of Israel must rule with Messiah when after the “great tribulation” (Mt. 24:21) they become “the head, and not the tail” (Dt. 28:13).

This will be a total reversal of Israel’s condition. And so during the Holocaust, which the Jews mistakenly described as the “birth pangs of Messiah,” the children of Rachel were accounted as lambs for the slaughter (Zech. 11:4,7). For having led the Lord as a lamb to the slaughter and crucified the King, God has rejected them. And this must remain so until they confess that He “was wounded for our transgressions, He was bruised for our iniquities: the chastisement of our peace was upon Him; and with His stripes we are healed” (Isa. 53:5). Meanwhile despite all their fervent devotions, “Then shall they cry unto the LORD, but He will not hear them; He will even hide His face from them at that time, as they have behaved themselves ill in their doings” (Mic. 3:4).

For 40 years after Calvary God dealt graciously with those who murdered His Son, but prophecy had to be fulfilled. Though Christ wept over the foreseen destruction of Jerusalem, His tears could not prevent the city from being destroyed by the Romans in 70 AD. And so the Word was fulfilled: “Therefore shall Zion for your sake be plowed as a field, and Jerusalem shall become heaps, and the mountain of the house as the high places of the forest” (Mic. 3:12).

Nothing was sacred to the heathen invader who destroyed the temple (Mt. 23:38). Also the people were scattered abroad – the worst fears of those who had killed Christ as a pretext to save the nation (Jn. 11:50). Those remaining after the siege were driven out to wander the earth like Cain, cleaving to their ancient religion and waiting in vain for Messiah to restore them. For it was already written that “they shall wander from sea to sea, and from the north even to the east, they shall run to and fro to seek the word of the LORD, and shall not find it” (Amos 8:12).

Repentance, Faith, Restoration
Micah’s prophecy is one of forgiveness and restoration at last. For when Messiah returns, the nation will be restored to greater glory than in the days of Solomon. Hence the prophet cried, “But in the last days it shall come to pass, that the mountain of the house of the Lord shall be established in the top of the mountains, and it shall be exalted above the hills; and people shall flow unto it” (Mic. 4:1). However this restoration will be contingent upon the repentance and faith of those who crucified the Prince of Glory. The prophet Micah is not slow to preach the gospel. There are some wonderful gospel statements which remain a gift to preachers in the twenty-first century. For Israel’s God is our God and through faith in Christ He has cast all our sins “into the depths of the sea” (Mic. 7:19).