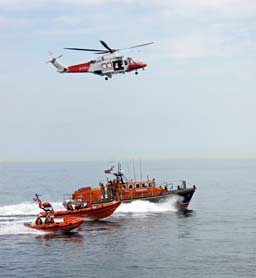 When the U.S. Navyrescued a ship’s captain held hostage by Somali pirates in April, 2009, it left an Italian boat owner astounded. Capt. Richard Phillips had been held hostage on a lifeboat for several days. He tried to escape on his own but was soon re-captured. Then the U.S. military converged on the site with ships, helicopters and a strong force of highly trained men. Together with an operation led by the Navy Seals, the United States took swift action and set the captain free. Silvio Bartoletti, owner of an Italian shipping company, who also had a boat seized by the pirates, marveled at the rescue reported by the Associated Press. Bartoletti said:“I’m marveling that they’d do that for one American.” Indeed, it was amazing to see the extent to which the United States would go for one person. This story, however, illustrates an event that is even more amazing: God, the creator of the universe, loved us so much that He took drastic measures, and went through an extraordinary process, to save us from our sins.

Christ said: “What man of you, having a hundred sheep, if he loses one of them, does not leave the ninety-nine in the wilderness, and go after the one which is lost until he finds it?” (Lk. 15:4 NKJV). God cares about the whole world, but He also cares about individuals. Christ said, “There will be more joy in heaven over one sinner who repents than over ninety-nine just persons who need no repentance” (Lk. 15:7).

The Bible, which is God’s Word,declares that we are all sinners (Rom. 3:23). Like the ship’s captain, we are held hostage by the powers of darkness. We need to be rescued. Like him, we also try to free ourselves through such means as religion and good works. But our efforts are in vain. Why? Because Christ alone is the One who can free us. “For there is no other name under heaven given among men by which we must be saved” (Acts 4:12).

Jesus Christ, the Son of God, left heaven and all of its glory so He could come to this earth as a man and die for our sins. He rose from the dead to set us free and give us everlasting life. He did all of this for you, for me, and the entire world.

The Bible tells us that “God so loved the world that He gave His only begotten Son, that whoever believes in Him should not perish but have everlasting life” (Jn. 3:16). Because of His love, and His great acts of kindness, nobody has to remain a hostage to sin.

What about you? Are you still in bondage? If so, please turn to Christ today and experience real freedom. Only then will you know the joy of being saved, and the thrill of having your own amazing rescue. Those who trust in Him will not be disappointed (Rom. 10:11).  We can tell you more.