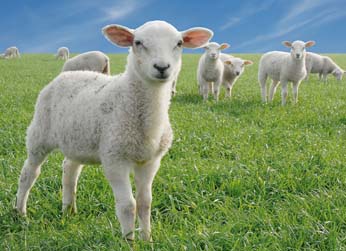 God’s LAMB “God Himself will provide the lamb for the burnt offering.” — Genesis 22:8 NIV The region surrounding Bethlehem was ideal for raising sheep. Not only was there good grazing land, but the hillsides also contained numerous caves which could be used by shepherds for shelter. Furthermore, there was an excellent market for these sheep in nearby Jerusalem. Many of Bethlehem’s sheep were raised for sacrifice at the temple. During the special feast days in Israel’s religious calendar, thousands of Jews would come to their holy city from all over the Roman Empire to offer sacrifices. Rather than transport their sacrificial lambs from their distant homes, they would buy them in Jerusalem. By law, the sheep slated for sacrifice had to be without blemish or defect (Ex. 12:5; Lev. 22-23; Num. 28-29). For this reason, the shepherds in the region of Bethlehem kept close watch over their special sheep.

A Special Lamb: “Your lamb shall be without blemish” (Exodus 12:5 Amp).
Over 2000 years ago, a very special Lamb was born in Bethlehem. He was born to die as a sacrificial Lamb in Jerusalem. He was born without blemish and was closely watched to insure that He was the perfect Lamb for sacrifice. In due time this Lamb was brought by God Himself to the place of sacrifice – a sacrifice for the sins of the people He loved. Thus as John the Baptist announced, Jesus was God’s Lamb “who takes away the sin of the world” (Jn. 1:29,36).

God’s Lamb was spotless. There was no sin in the perfect Lamb that God provided for sacrifice. The Bible states in no uncertain terms that the Lord Jesus Christ was sinless: “He committed no sin” (1 Pet. 2:22); He “knew no sin” (2 Cor. 5:21); “In Him is no sin” (1 Jn. 3:5). Twice during the earthly life of our Lord Jesus, the Father’s voice was heard from the heavens as He observed His spotless Lamb: “This is my Son, whom I love; with Him I am well pleased” (Mt. 3:17; 17:5). Notice that this divine declaration was made not only in the last year of our Lord’s public ministry (17:5), but it was also said at His baptism even before He began His public ministry. Before any of His miracles or great discourses, God declared that this Lamb was spotless.

Think of Jesus growing up. As a young boy, He never cheated in games or studies; He was never selfish with His few toys and personal possessions; He always told the truth to His parents and teachers. As a young man, He never lost His composure in the carpenter shop because of lost tools or bad wood; He never threw up His hands in disgust or raised His voice out of frustration. As He grew into manhood, His thoughts about the opposite sex were always pure; He always honored His parents. How convicted we are of our sins and our sinful nature as we think of the spotless Lamb of God!

A Tested Lamb: “He was oppressed and afflicted, yet He did not open His mouth; He was led like a lamb to the slaughter …” (Isaiah 53:7a).
For approximately 33 years, God’s Lamb was tested and tried day and night in a life full of afflictions and attractions, yet He was “without sin” (Heb. 4:15). And then came that one day in history when the Lamb of God “offered Himself unblemished to God” (Heb. 9:14), in order that we might be cleansed from sin. As Old Testament Israel was redeemed out of slavery in Egypt by means of the shed blood of the Passover lamb (Ex. 12), so we have been redeemed “with the precious blood of Christ, a Lamb without blemish or defect” (1 Pet. 1:19).

God’s Lamb was silent. When mistreated, the Lord Jesus spoke no deceit, retaliation or threat (1 Pet. 2:22-23). When falsely accused, He did not protest or demand to be heard (Mt. 26:62-63; 27:12-14). When He was afflicted and attacked, He did not complain, voice bitterness or cry out for immediate retribution – even though it was always in His power to do so (Mt. 26:53). How wondrously different from us was our Lord in His silence. Too often we are so engrossed in self-pity and so bent on self-justification that we find it impossible to keep our mouths shut. According to 1 Peter 2:23, we should “not retaliate” even when unjustly treated, for we are called to follow our Lord’s example.

The silence of God’s Lamb was predicted 700 years before His coming by the prophet Isaiah. In his prophecy we find the coming Messiah likened to a silent lamb (Isa. 53:7). Sheep that are silent before their shearers and silent on their way to slaughter, for the most part are not aware of what is about to happen. But not so with God’s Lamb. He was fully aware that in the prime of His life, He was about to be “cut off out of the land of the living” (53:8). And yet He was like a lamb led to slaughter and like a sheep before shearers – silent!

A Sheared Lamb: “… and as a sheep before its shearers is silent, so He did not open His mouth” (Isaiah 53:7b).
Although silence is the main thought in the comparison of the Lord Jesus with a sheep that is about to be sheared, there may be an additional line of thought for meditation in the idea of shearing. Our Lord was certainly shorn for our sakes on His way to the cross. He voluntarily stripped Himself of His heavenly “robes” of glory and majesty when He came to this earth and took on humanity. He was divested of His rightful honor throughout His public ministry. The nation of Israel continually dishonored Him when they would not receive Him as their Messiah – even after He presented all the necessary credentials. Their dishonor actually reached the depths of accusing Christ of being in league with the devil!

Our Lord underwent the shearing of personal dignity, especially during His trial and crucifixion. He was mocked and spit upon. He was despised and treated as a worm and not human (Ps. 22:6). He literally was stripped of His clothes, a shame and a particularly humiliating act in that culture.

Ultimately the shearing process involved His own righteousness, as He became the sin bearer. Of course this does not mean that the Lord Jesus ever became anything less than perfectly righteous in His intrinsic personal essence. As our substitute on the cross, however, He took our sin upon Himself. The full wrath of God against our sin fell on Him as if we, the unrighteous, were hanging on that cross. Because of Christ’s “shearing” we have been “clothed” with righteousness (2 Cor. 5:21). Finally, the shearing involved the physical life of the Lord Jesus. He willingly gave up His life for us in death – even death on the cross! (Phil. 2:5-8). The unselfish silence of the Lamb of God through a lifetime of shearing stands out in marked contrast to our constant bleating (complaining).

A Sacrificed Lamb: “Look, the Lamb of God, who takes away the sin of the world” (John 1:29).
God’s Lamb was sacrificed. The death of Christ was no accident of history. In the natural way of looking at things, it appeared that Jesus of Nazareth just happened to be in the wrong place at the wrong time. If only He’d stayed in Galilee! If only He’d defended Himself! If only He’d escaped when He had the chance! But from the divine perspective all was according to plan and right on schedule (Acts 2:23).

A Standing Lamb: “Then I saw a Lamb, looking as it had been slain, standing in the center of the throne” (Revelation 5:6).
God’s Lamb is now standing. Although Hebrews 1:3 and 10:12 inform us that the Lord Jesus is seated at the right hand of God, the apostle John saw a Lamb standing in his vision of the future (Rev. 5:6). This is not a contradiction in the Bible, but rather figurative language used to convey the same idea, as Jesus isn’t literally a lamb. When Hebrews says that Christ “sat down,” we understand that Christ’s sacrifice for our sins is sufficient (Heb. 1:3). His sacrificial work as our substitute is finished. The question of our sins is settled and there is no further need for blood sacrifice. Praise God! The vision of the Lamb standing conveys the same truth. God’s Lamb no longer lies slain on the altar. Having been slain, once and for all, He now stands in resurrection triumph.

As we read on in Revelation 5 (see p. 3), we are given a glimpse of God’s Lamb receiving universal praise and honor. The Lamb that was born in the little town of Bethlehem will stand forever as the focus of eternal attention and worship. Is God’s Lamb the central focus of our attention and our worship now?