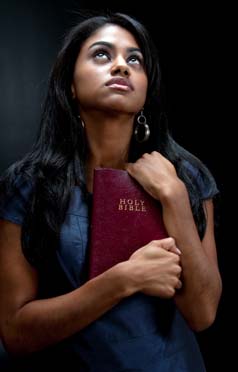 Believe It: The Lord Lives! “The Lord lives! Blessed be my Rock! Let the God of my salvation be exalted.” — Psalm 18:46 NKJV

King David’s God was personal, living and real. He spoke to the Lord and the Lord spoke to him. In his life and in his decisions, the Lord was as real as his friends and family. He didn’t need anyone to prove to him that God existed because he knew that He did. He must have become fully aware of the Lord’s presence and glory while in the fields tending sheep and studying creation all around him. He believed that the heavens were God’s handiwork and that they reflected His glory (Ps. 19:1). God was not abstract; He was a real living presence in David’s life. David never saw the Lord Jesus, nor did he see the back side of Jehovah as Moses had done (Ex. 33:18-23). Yet he enjoyed the presence of the Lord in his life. Neither have we seen the Lord Jesus, but we have a wonderful word-picture describing Him in the four Gospels. We too can and should be enjoying the same kind of relationship with the Lord that David enjoyed. Peter reminds us, “Whom having not seen you love. Though now you do not see Him, yet believing, you rejoice with joy inexpressible and full of glory” (1 Pet. 1:8). What would keep people from enjoying this kind of relationship? Unbelief is the crowning sin. Hebrews 11:6 says, “Without faith it is impossible to please Him, for he who comes to God must believe that He is, and that He is a rewarder of those who diligently seek Him.” Again and again God says that “He is.” He not only is, but He is also the provider of life; He is Life (Jn. 11:25). Why would people who have breath that was given to them, not believe in the giver of that breath (Gen. 2:6-7)? Yet there are many people who believe that they just happened, that they came from nowhere and are going nowhere. They do not believe that the Lord lives!

Going through life separated from the God who created us is like trying to swim against the current in a river. It can be done, but it is a lot easier to swim with the current. Scientists who build upon the premise that there is no God, which they cannot prove, are building upon a sandy foundation (Mt. 7:24-27). They may find out things about God’s creation, but they will never fully understand its secrets. People who live their life denying that there is a God often live as though they are not constrained by what they call the “old fashioned” moral principles of the Bible. However, these moral principles have been the basis of order in every successful society whether they were obeyed because of conscience or because they were written down and made a part of the laws of the land.

The real value of living the way David did is that it gives meaning to life as well as giving real confidence at the time of death. To die and find out that God is real and that heaven and hell are real is going to be a great shock to the unbeliever.

To know John 3:16 in life and to believe it, gives us a Savior to enjoy now and prepares us for a home with Him in heaven forever: “God so loved the world that He gave His only begotten Son, that whoever believes in Him should not perish but have everlasting life.” To know John 3:16 and to reject God’s love will haunt all those who end up in hell’s fire for eternity. Those who do this will know that they could have been saved but instead foolishly rejected the very giver and sustainer of life.

I’m glad I, like David, know that the Lord lives. In John 14:19, Jesus assures His disciples that “because I live, you will live also.” I believe this promise also applies to us who are saved today. I believe it includes me, and I hope it includes you as well. Let the God of our salvation be exalted!