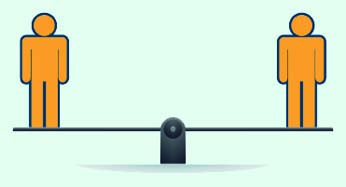 Perfect Balance GRACE & TRUTH “And the Word became flesh and dwelt among us, and we beheld His glory, the glory as of the only begotten of the Father, full of grace and truth.” – John 1:14 NKJV The “Word” in this verse is the Lord. He is the way God has communicated to us in these last days (Heb. 1:1-2). He is not only the vehicle or the words that convey a message; He is the message itself. There is power in words. Former President of United States, Ronald Reagan, was called “the great communicator” as he knew how to use words when dealing with the public. During a very difficult period in World War Two, Winston Churchill was able to keep England encouraged by his speeches. What we say and the way we say it has a great effect on the people to whom we speak. The Lord had a great effect on His disciples, communicating to them a message of grace and truth.

What glory did the disciples see when they saw the Lord? Preachers used to tell us that one of the principles of Bible interpretation is to assume that the key to any question raised by a passage is always near the door. In other words the context of a passage will usually tell us how to interpret that passage. In John 1:14, I believe the word “glory” is used to mean the beauties of the Lord. The beauties seen were these two characteristics: grace and truth. They were seen in perfect balance as the Lord communicated the essence of God to us in His life here on earth.

Old Testament prophets including John the Baptist were not usually characterized by grace even though God was gracious in that time. But the emphasis, as I read the Old Testament, is on the consequences of sin. The nation of Israel turned their back on God and they suffered for it. Jeremiah cries in Lamentations 1:12 saying, “Is it nothing to you, all you who pass by? Behold and see if there is any sorrow like my sorrow, which has been brought on me, which the Lord has inflicted in the day of His fierce anger.” This experience is often applied to the Lord on the cross, but it is really, at the time of writing, the cry of Jeremiah over a devastated Jerusalem. Later, John the Baptist reminded the nation of their sin and told them to repent (turn back to Jehovah) in order to prepare for the coming of the Lord. Now here in John 1, the disciples have seen the Lord; and while He maintains the truth, He is also marked by grace.

Grace is often defined as a gift. Grace is something that is not deserved or earned, but it is necessary when trying to maintain the truth. If a car were used as an analogy, truth would be the engine and grace would be the oil that keeps it running smoothly. Without oil, the engine may run for a while, but fairly soon it will make a lot of noise and freeze up.

We talk about children being full of mischief. Some people are full of themselves and others are full of evil. People are full of whatever controls them. If we who are saved are being conformed to the image of the Lord (Rom. 8:29), then we ought to be more and more gracious while not giving up any truth. We should be full of grace and truth.

The Lord tells us what the truth is and what the consequences are for not believing the truth. The truth is that we are all sinners and that Christ died for all. However, all do not receive this truth and therefore they will suffer eternally – this is the truth! The Lord does not force His truth on anyone. He begs, He exhorts, He reasons, but He does not force people to believe in Him. I believe that grace means that He died for us instead of asking us to die for Him, as a normal king would expect. Grace involves self-denial and self-sacrifice rather than self-centeredness, because grace is concerned about the welfare of others. Grace is concerned about giving, not getting.

Grace is a wonderful thing, particularly when we are the recipients of it. But if receiving grace is such a blessing, obviously we can bless others by being gracious ourselves. Wouldn’t it be nice if, when we left this life, the sermon title for our funeral could honestly be: “He (or she) was full of grace and truth”?