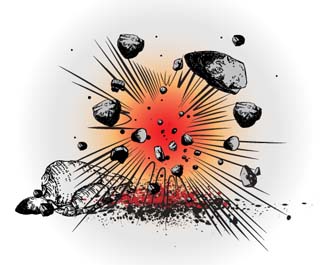 Condemnation In the early chapters of Romans the apostle Paul wrote about our corrupt human condition. That condition is exposed to the wrath of God (1:18) and is desperately in need of deliverance into a life of righteousness worthy of God. Paul says that God holds people guilty of “suppressing the truth” by our unrighteousness; that is, denying, opposing or rejecting His revelation of Himself and of our desperate condition by enthusiastically believing in and vigorously practicing our sinfulness. We are experts in this. Suppression of truth begins by denying God and His Creator–rights. All creation bears clear witness to God’s existence and to His “eternal power and divine nature,” leaving us “without excuse” before Him (1:18-20).

Denial of God leads into a downward spiral by substituting human and lesser creatures or things in place of Him. This is idolatry – boasting in our own imagined superior wisdom and understanding (1:21-23). Persistent refusal to acknowledge God brings deepening moral perversion, social corruption and ultimately utter rejection of God – leaving Him no option but to abandon mankind to his choices and their consequences (1:24-32). The apostle again cries out to humanity, “You have no excuse” (2:1). Our innate sense of justice, now distorted by our own corruption, dares to accuse and condemn. We judge each other but refuse to acknowledge God’s righteous judgment. Again, there is no alternative but ultimate, impartial judgment from God, “render[ing] to each one according to his works” (2:1-11). We have all willfully participated in the massive human slide into godlessness and moral/spiritual corruption (2:12-29).

The conclusion? All mankind is guilty before God, with no Jew–Gentile distinction. “None is righteous, no, not one; no one understands; no one seeks for God. All have turned aside; together they have become worthless … There is no fear of God before their eyes” (3:1-18). Even the law that God gave through Moses is helpless to justify. It only exposes our guilt and condemns us. “By works of the law no human being will be justified in His sight, since through the law comes knowledge of sin” (3:19-20). The human condition is indeed desperate – the problem is immense. What force can break the grip of evil and rescue a lost human race? Only the dynamite of God!

Dynamite Of God
The Greek word for the “power” of God in Romans 1:16 is dunamis, from which we get our English “dynamite.” We know dynamite is a destructive power that causes an explosion. Used for demolition, it is a force that breaks up mountains and brings down old buildings. The “dynamite” of the gospel of Christ is supremely non-destructive – except in its effect on sin and sinful living. It is the power of God to salvation.

A person who would go around dynamiting people’s houses and businesses would be a menace in his community and would need to go into hiding. But Paul wields the supernatural power of the gospel shamelessly because it is the power of God for salvation, rescue, renewal and transformation to all who trustingly submit to its force and effects. The gospel truly is (non-destructive) dynamite!

Transformation
God’s dynamite is destructive, or at least disruptive, to business as usual for human society. In Thessalonica Paul and Silas were arrested and jailed for “turning the world upside down” (Acts 17:6), simply by preaching a gospel that turns an upside down world “upright.” Later in Thessalonica, that same gospel turned many of its citizens “from idols to serve the living and true God, and to wait for His Son from heaven” (1 Th. 1:9-10).

For Paul himself, this dynamite had transformed him from the “foremost among sinners” (1 Tim. 1:15), who was a mortal enemy and dedicated persecutor of Christians, into a Christian champion! Astonished Christians testified: “he who used to persecute us is now preaching the faith he once tried to destroy” (Gal. 1:23).

Charles Colson, a well-known evangelist, died in 2012. In the 1970s Chuck was a politically ruthless force, a formidable figure in the White House as President Nixon’s “hatchet man” (an executioner in the political sense). Colson wrote that he would walk over his own grandmother for the president. For complicity in the Watergate scandal he was sentenced to federal prison. Shortly before his imprisonment he had a spiritual crisis and was led by a friend to bow at the feet of Jesus Christ. Great skepticism greeted news of his conversion, but it soon became clear that he had indeed been transformed. God used Colson’s prison experience to direct him into lifelong ministry to those in prisons and their families, and an outspoken voice for Christ. The gospel turned his upside down life upright and landed him on his feet for God’s glory.

In the summer of 1969, Norma McCorvey, better known as “Jane Roe” of the Roe v. Wade Supreme Court decision that opened the floodgates for legalized abortion in the United States, was pregnant and seeking an abortion. The pro-abortion movement “adopted” her as its cause c´elèbre and plaintiff before the courts and her suit ultimately achieved the historic ruling. McCorvey herself did not abort but gave her child up for adoption. (Her pregnancy was so critical to the pro-abortion case that she was kept from aborting while the courts deliberated, and she ultimately delivered her baby.) Yet she continued to support abortion, working in an abortion clinic for years.

The slaughter she witnessed daily began to trouble her conscience. Next door to her clinic, a pro-life center opened and the daughter of one of its workers caught Norma’s eye and heart. Over time, this helped open Norma’s eyes to the horror she was helping to perpetuate. Through the probing questions and loving friendship of this innocent little girl and the compassion of the girl’s mother, Norma McCorvey was gradually won over and came to embrace the Lord Jesus Christ as her Savior. One day she resigned from the abortion clinic and went next door to begin working at the pro-life center. Today, she continues to support and promote life while opposing abortion. The gospel dynamite destroyed an instrument of death, recreating her as an instrument of life and peace.

William J. Murray is the son of Madalyn Murray O’Hair, the atheist activist who successfully sued to ban prayer and Bible reading in public schools. Bill, a student, was the plaintiff. His mother’s outrage that the Bible was being read aloud in the classroom incited her. Bill himself, in his autobiography, My Life Without God, wrote that he grew up the son of an obsessively driven enemy of God and the gospel. Bill Murray later became a fervent Christian and continues to be active for Christ. He prayed for his mother daily though she publicly denounced him and his faith, disowning him. Much later, she mysteriously disappeared and was found to have been murdered by someone in her own atheistic organization. But in his life, Bill experienced the dynamite of the gospel of Jesus Christ and was “born again” into eternal life.

Our Condition
Most conversions are far less dramatic than these, yet none is more radical. “All have sinned and fall short of the glory of God” (Rom. 3:23). Romans 5:12 tells us that “just as sin came into the world through one man, and death through sin … so death spread to all men because all sinned.” We who were born to Christian parents, raised in the church and in biblical practices of holy living are nevertheless, by nature, just as sinful and lost as the most hardened criminal or the most jaded pervert. We have all descended from our first parents, inheriting their fallen nature – the root of sin that makes us guilty before God prior to committing any sinful act. David describes all of us as he describes his own condition: “Surely I was sinful at birth, sinful from the time my mother conceived me” (Ps. 51:5 NIV).

The sinful nature evidences itself early through the stubborn protests and contrary disposition of infants. Their first word is frequently “no,” expressing rebellion and resistance rather than submission. Soon that nature opposes rules and limits and launches overt attacks on parental authority. Such observations are evidence that humans need to be born again through confession and repentance; born anew by virtue of the substitutionary suffering and death of Jesus Christ; born into a new, eternal life with a sinless nature. Only the dynamite of God can accomplish this!

The Continuing Work
Dynamite quickly takes down large buildings in order to clear ground for new construction. But erecting a new building takes time and hard work. Paul describes the transforming effects of the gospel in 2 Corinthians 5:17-21 (ESV): “If anyone is in Christ, he is a new creation. The old has passed away; behold, the new has come. All this is from God, who through Christ reconciled us to Himself and gave us the ministry of reconciliation; that is, in Christ God was reconciling the world to Himself, not counting their trespasses against them, and entrusting to us the ministry of reconciliation. Therefore, we are ambassadors for Christ, God making His appeal through us. We implore you on behalf of Christ, be reconciled to God. For our sake He made Him to be sin who knew no sin, so that in Him we might become the righteousness of God.”

Paul has just described how the gospel accomplishes the complete transformation from demolition of the old, to removal of the rubble, to preparation of the ground and the construction of a glorious new building! The new person in Christ is now authorized and energized to work as an agent of a continuing process of renewal, reconciliation, and reviving other ruins.