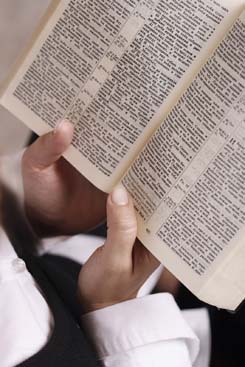 Jesus, born in the little village of Bethlehem in Israel, lived for about 33 years before dying on a Roman cross. Although He was not wealthy, never carried arms nor wrote a book, He has tremendous influence even up to this very present day; and His influence and effect on people are permanent and eternal. Over 2000 years have passed since the birth of Christ, but God saw to it that His life was accurately recorded in the Bible. The Bible is God’s Holy Word – inspired and preserved for us without change to the present day. Actually the Bible is a collection of 66 books of which four (Matthew, Mark, Luke, and John) tell us all about His life. Let’s take a look at what they have to say. The Birth Of Jesus Christ According to Luke the angel Gabriel came to the virgin Mary and told her, “Rejoice, highly favored one, the Lord is with you; blessed are you among women!” Mary was troubled and wondered what the angel meant. He explained to her that she would give birth to a Son and that she was to name Him Jesus. “He will be great, and will be called the Son of the Highest,” he said (Lk. 1:28,32 NKJV). However Mary wasn’t married so she wondered how this would be possible. Gabriel further explained, “The Holy Spirit will come upon you, and the power of the Highest will overshadow you; therefore, also, that Holy One who is to be born will be called the Son of God” (Lk. 1:35).

Mary was engaged to be married to Joseph, however he didn’t know anything about what took place. When he found out that Mary was pregnant, he was about to break up with her. An angel came to him and said, “Joseph, son of David, do not be afraid to take to you Mary your wife, for that which is conceived in her is of the Holy Spirit. And she will bring forth a Son, and you shall call His name Jesus, for He will save His people from their sins” (Mt. 1:18-21).

After Jesus was born some shepherds were taking care of their flocks one night when an angel announced to them, “I bring you good tidings of great joy which will be to all people. For there is born to you this day in the city of David a Savior, who is Christ the Lord” (Lk. 2:10-11). Later, wise men guided by a star came from the east to see Jesus. When they found Him they fell down and worshiped Him and gave Him gifts (Mt. 2:1-12).

When Jesus was a few weeks old, Joseph and Mary took Him to Jerusalem. There they met a man named Simeon who was a godly man. Somehow God revealed to him that he would not die until he had seen Jesus. When he saw Him, he took Him in his arms, blessed God and said, “Lord, now You are letting Your servant depart in peace, according to Your word; for my eyes have seen Your salvation” (Lk. 2:29-30).

There is something else very unusual about the birth of Christ: It was predicted hundreds of years before in the earlier books of the Bible called the Old Testament. For example: Micah was a prophet who lived 700 years before Christ was born. He writes: “But you, Bethlehem Ephrathah, though you are little among the thousands of Judah, yet out of you shall come forth to Me the One to be ruler in Israel” (Mic. 5:2). Another prophet around the same time wrote, “Behold, the virgin shall conceive and bear a Son, and shall call His name Immanuel” (Isa. 7:14). The name Immanuel means “God with us.” This is also quoted in Matthew 1:23.

There are many other predictions in the Old Testament of the coming of Jesus Christ into this world. He is the only One of whom hundreds of prophecies were given hundreds of years before He came. This in itself is miraculous – who but God can foretell the future?

Jesus was holy. The religious leaders of the day watched Him very carefully hoping to find something wrong with Him because they were jealous. Jesus challenged them, “Which of you convicts Me of sin?” (Jn. 8:46). No one could answer Him; no one could point to anything bad in Him. Even at His trial when Pilate the governor examined Jesus, he had to admit that he could not find any fault in Him (Lk. 23:4). After His execution a Roman military commander was heard to say, “Certainly, this was a righteous Man” (Lk. 23:47).

John testified that Jesus was full of grace and truth; and that he saw His glory (Jn. 1:14). Isaiah the prophet wrote: “He had done no violence, nor was any deceit in His mouth” (Isa. 53:9).

When you read about prophets in the Old Testament, you will discover that they confess their own sins. For example David said: “For I acknowledge my transgressions, and my sin is ever before me. Against You, You only, have I sinned and done this evil in Your sight” (Ps. 51:3-4). Isaiah also writes: “But we are all like an unclean thing, and all our righteousnesses are like filthy rags” (Isa. 64:6).

Prophets of the Old Testament were godly men but they were far from perfect. Jesus Christ was perfect in every way. He was perfect in His love, grace, and in His sacrificing Himself for the sake of others. He was affectionate and merciful, comforting the unfortunate and healing the broken hearted. “He went around doing good and healing all who were oppressed by the devil, for God was with Him” (Acts 10:38). See also Matthew 9:35 and Mark 7:37.

Jesus was gracious and merciful. One day He and His disciples went to a village but the people refused to receive Him. Two of His disciples asked Jesus, “Lord, do You want us to command fire to come down from heaven and consume them, just as Elijah did?” But Jesus rebuked them, “You do not know what manner of spirit you are of. For the Son of Man did not come to destroy men’s lives but to save them” (Lk. 9:54-56).

Compare this attitude with many political and religious leaders who sacrificed the lives of their followers and of their enemies in order to obtain their greedy desires. Jesus did not wage war to conquer cities, acquire lands and possessions, or gain a following. No, He opened the eyes of the blind, healing them as well as enlightening them as to their spiritual need. He opened people’s hearts to purify them and remove their guilt and sin.

On one occasion some religious leaders brought a woman to Jesus and asked Him, “Teacher, this woman was caught in adultery, in the very act. Now Moses, in the law, commanded us that such should be stoned. But what do You say?” They were trying to trick Jesus into making a serious mistake so they could accuse Him. Here was a dilemma! If Jesus said let her go, He would have been guilty of going against the law. If He agreed to have her stoned, where would the mercy that He taught about be? His answer was, “He who is without sin among you, let him throw a stone at her first.” Her accusers, being convicted by their own consciences left one by one. Jesus did not consider her sin a light matter. It certainly was a serious sin. She deserved to be executed according to the law, but He gave her another chance to repent and to live a godly life. He told her, “Go and sin no more” (Jn. 8:1-11).

This is what Jesus does for sinners who come to Him for forgiveness. He forgives their sins and gives them the strength to live godly lives. Can you see that Jesus’ compassion surpasses that of all other spiritual and religious leaders and founders? He came to give men, women and children a new life, spiritual sight and the power to live a godly life.

Jesus was humble. Despite His greatness and power He was a humble Man and invited people, “Come to Me, all you who labor and are heavy laden, and I will give you rest. Take My yoke upon you and learn from Me, for I am gentle and lowly in heart, and you will find rest for your souls” (Mt. 11:28-29).

Jesus did not live in a castle or a palace, neither did He own slaves or servants; instead He told His disciples that He was among them to serve (Lk. 22:27). Mark records in his book, “For even the Son of Man did not come to be served, but to serve, and to give His life a ransom for many” (Mk. 10:45).

Jesus was wise. He did not go to school or any institution of higher learning, yet His wisdom and knowledge was profound. When He was 12 years old, He was sitting among the doctors and the teachers of the Law, listening to them and asking them questions. Everyone who heard Him was amazed at His understanding and His answers (Lk. 2:41-50). Isaiah prophesied about Jesus, “The Spirit of the LORD shall rest upon Him, the Spirit of wisdom and understanding, the Spirit of counsel and might, the Spirit of knowledge and of the fear of the LORD” (Isa. 11:2).

His harshest words were reserved for the religious hypocrites of His day, who hated Him and tried to argue with Him every chance they got. When people asked Him questions, He always answered with great wisdom and graciously. Therefore many believed on Him, but many did not.