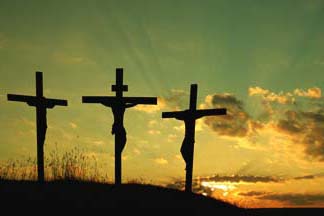 The Last Words Of Christ From The Cross “And when Jesus had cried out with a loud voice, He said, ‘Father, into Your hands I commit My spirit.’ Having said this, He breathed His last.” Luke 23:46 NKJV

The above words set before us the seventh utterance of the Savior, the last before He died. It was an utterance of faith, confidence and love. The Person to whom He committed His spirit was His own Father. Christ was always dear to His Father, and with this closing utterance He put His spirit confidently into His hands. We learn seven lessons from our Savior’s closing utterance. 1. Evidence of Christ’s perfections While He hung on the cross, Jesus spoke seven times. In Scripture seven is the number of completion or perfection, and it is also the number of rest after a completed work. A work had been given to the Savior by His Father, and that work was now done. Just as the sixth day brought the work of creation to completion, so the sixth utterance of the Savior was “It is finished” (Jn. 19:30). And just as the seventh day was the day of rest, so the seventh utterance of the Redeemer brought Him to the place of rest in the Father’s hands.

2. Not exhausted on the cross
Despite much bleeding and intense physical, mental and emotional anguish, Christ retained His full vigor. On the cross He was in full possession of His mental faculties, and His terrible sufferings had neither deranged nor disturbed His mind. Three times we read that the Savior on the cross cried with a loud voice. In the fourth of His cross utterances, “Jesus cried out with a loud voice, saying, ‘Eli, Eli, lama, sabachathani?’ that is, ‘My God, My God, why have You forsaken Me?’” (Mt. 27:46). Why does the Holy Spirit tell us that the Savior uttered this terrible cry “with a loud voice”? And why does He repeat these words four verses later: “And Jesus cried out again with a loud voice, and yielded up His spirit” (Mt. 27:50). These cries of the suffering Savior tell us that He was not exhausted by what He had passed through, that He was still in control, that His strength did not fail Him. They also show us that God had “given help to One who is mighty” (Ps. 89:19).

In His sixth utterance, we have additional proof that the Savior was not in shock: “When Jesus had received the sour wine, He said, ‘It is finished!’ And bowing His head, He gave up His spirit” (Jn. 19:30). Before this our Lord’s head had been held erect. Had He been exhausted by His suffering His head would have dropped helplessly to His chest, and it would have been impossible for Him to bow it. His head was erect and He consciously and reverently bowed it. All this shows that He was not conquered by death, but yielded Himself to it.

4. Communion with the Father
Throughout His life, Jesus had unbroken communion with His Father. When His mother sought Him in Jerusalem as a boy of twelve years, He said, “Did you not know that I must be about My Father’s business?” (Lk. 2:49). In the Sermon on the Mount, He mentioned His Father 17 times. In His final discourse to the disciples (Jn. 14-16) “Father” was said at least 45 times. In His high priestly prayer (Jn. 17), He spoke to His Father six times. The awful “cup” was accepted from His Father’s hand: “Shall I not drink the cup which My Father has given Me?” (Jn. 18:11).

On the cross Jesus was still in communion with the Father. His first words from the cross were “Father, forgive them” (Lk. 23:34), and His last were “Father, into Your hands I commit My Spirit” (Lk. 23:46). Between these two utterances, He maintained His communion with the Father, except during the three hours of darkness when all the sins of the world were laid upon Him.

Even when the Savior was on the cross, surrounded by a taunting crowd and enduring intense agony, He was in fellowship with His Father. This shows us that communion with God may be enjoyed in spite of circumstances. It is our privilege to have communion with God at all times. This fellowship with God is by faith and not by sight (2 Cor. 5:7). No matter how unpleasant our conditions may be, it is our privilege to enjoy communion with God. Just as the three men had fellowship with the Lord in the midst of the fiery furnace, as Daniel did in the lion’s den, as Paul and Silas did in the Philippian jail, and as the Savior did on the cross, so may we – wherever we are. What comfort in knowing that His Father is our Father, and that He always cares for us (1 Pet. 5:7). As we enter more deeply into this relationship we can joyfully say with the apostle, “Behold, what manner of love the Father has bestowed upon us, that we should be called children of God” (1 Jn. 3:1).

5. A voluntary death
Jesus was not powerless in the hands of His enemies. As His life was different from all other lives, so His death was different from all other deaths. This was clearly intimated in His own utterance upon this subject: “Therefore My Father loves Me, because I lay down My life that I may take it again. No one takes it from Me, but I lay it down of Myself. I have power to lay it down, and I have power to take it again. This command I have received of My Father” (Jn. 10:17-18). Jesus voluntarily delivered Himself into the hands of sinful men, and voluntarily delivered His spirit into the hands of His Father. He died by an act of His own will. None but a divine person could do this. It was proof of His uniqueness.

The Father’s hand is the place of eternal security. Referring to His people, He said, “My Father, who has given them to Me, is greater than all, and no one is able to snatch them out of My Father’s hand” (Jn. 10:29). This is the basis of our assurance and our confidence. Nothing can touch the spirit of the believer held by the Hand of Omnipotence. We are weak in ourselves, but we are “kept by the power of God through faith for salvation” (1 Pet. 1:5).

6. Precious human spirit
Scripture reveals man as a tripartite being – “spirit, soul and body” (1 Th. 5:23). The spirit is the highest part, capable of communion with God. It distinguishes man from the beasts, and links him to God. We are told that God “forms the spirit of man” (Zech. 12:1) and is called “The God of the spirits of all flesh” (Eccl. 12:7). On the cross Jesus committed the precious treasure of His spirit into His Father’s hands – the place of security and rest (Lk. 23:46).

We should not fear death. David wrote, “Though I walk through the valley of the shadow of death, I will fear no evil; for You are with me” (Ps. 23:4). Death cannot hurt us because Christ has extracted the sting out of death (1 Cor. 15:54-57). Death is simply the door which admits us into the Lord’s presence. When death draws near, our cry should be like Christ’s: “Father, into Your hands I commit my spirit.”

Christ is your example.
He committed His spirit into His Father’s hands in death because it had been in His Father’s hands all through His life. Is this true of you? As a sinner, have you committed your spirit into God’s hands? Can you say with the apostle Paul, “I know … that He is able to keep what I have committed to Him until that Day” (2 Tim. 1:12)? Can you say with Paul, “For me, to live is Christ, and to die is gain” (Phil 1:21)?

It is my prayer that you commit your spirit to God and live for His glory.