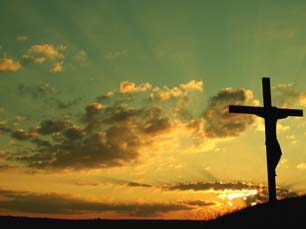 Seven Words From Another Cross

“And when they had come to the place called Calvary, there they crucified Him, and the criminals, one on the right hand and the other on the left.” Luke 23:33 NKJV

All four gospels record that Jesus was crucified between two other men. It was a deliberate act of the Roman authorities, staged to humiliate Jesus in front of a scoffing crowd. The significance of this multiple, independent testimony to the drama cannot be over-emphasized. Matthew and Mark refer to the other two as “thieves” and both note that they had united with the chief priests and scribes in their mockery of Jesus (Mt. 27:38,44; Mk. 15:27,32). Luke provides the most detailed commentary on their interactions with one another and Jesus, as He hung within between them. These brief exchanges can be referred to as “seven words from another cross.”

1. Why don’t You do something?
The first word was addressed to Jesus: “If you are the Christ, save Yourself and us” (Lk. 23:39). This cynical outburst clearly reflected the attitude of both men, but Luke only records one thief as saying the actual words, mimicking those of their religious leaders, as recorded in Luke 23:35. It was a jeer as well as a plea, but in a perverse way it was a resounding testimony to the Messiahship of Jesus – He was the Christ, and He could have done what they asked. But the path to true salvation did not lie in such a miraculous and spectacular act.

2. Don’t you fear God?
This comment and the two following were voiced by one criminal to the other. “Do you not even fear God, seeing you are under the same condemnation” (Lk. 23:40). All three were going to die the same lingering, excruciating death of crucifixion, a form of punishment devised by the Roman overlords, but something no Roman would ever be legally permitted to suffer. It was a form of death reserved for lesser breeds. But the testimony contained in these words was evidence of a change of heart which started to occur in one of the two men. What comes after death? What judgments had a righteous God reserved for criminals such as themselves? This man had good reason to be scared, and to warn his fellow about their impending doom.

3. We deserve what we get.
This was followed by an admission of the justice of his own punishment and that of his fellow criminal. “We indeed justly … receive the due reward of our deeds” (Lk. 23:41). Matthew and Mark described them as “thieves” or “robbers.” But Luke described them as “criminals” (Lk. 23:39), a stronger Greek word. They were more than just petty thieves. They were probably common robbers, lurking in the hills and highways around Jerusalem, who waylaid travelers and beat them up for their money. Their crimes were so serious that the death penalty was prescribed by the Romans. Now they were close to death, living out their last hours hanging in supernatural darkness on the skull-shaped hill called Golgotha or Calvary, just outside Jerusalem. And one of them was prepared to admit his culpability. The beginning of repentance is an admission of guilt followed by a change of heart about oneself and about the Savior, Jesus Christ.

4. This Man is innocent.
How the repentant criminal came to this conclusion we do not know. He may have seen or heard something of Jesus’ miracles and teaching; he may have known that both Pilate and Herod thought Jesus to be innocent; he would have heard the words Jesus said while hanging between them, especially His gracious words: “Father forgive them, for they do not know what they do” (Lk. 23:34). Perhaps it was these words which finally convinced him. Such unparalleled, unrequested forgiveness is amazing, and cannot help but turn hearts from bitterness to admiration and reverence.

5. You must really be the Messiah.
From this point onward the repentant criminal was in conversation with Jesus Himself. The two thieves no longer held a united opinion of Christ – they parted company in their views. One of them addressed Him as “Lord” (23:42). Even though some translations use the word “Jesus” here in place of “Lord,” there can be no doubt that this man had come to recognize who the Man on the central cross really was. The skeptical retort of the two criminals at the outset “If You are the Christ, save Yourself and us” had been answered by the believing response of one of them. Of the other we know nothing. No further words of his were recorded. He may have been unconscious or dead already. But nothing short of divine revelation must have convinced this one criminal that the Man beside him, dying in such dreadful circumstances, was indeed God, the long-awaited Savior of the Jews. Human reasoning alone would not have brought him to this understanding.

6. I know You will come to life again.
Although these words were not actually spoken by the criminal, they were implicit in what he began to say. Jesus may have been at the point of death, but He was going to take up His kingdom and reign sometime in the future. For Him, death could not be the end. Perhaps the dying man had an inkling that there was indeed a world to come, when the penitent would be rewarded and the impenitent judged and punished. We do not know what was going on in his mind. But of this we can be sure: Mere acceptance of the true identity of a person had been transcended, belief had taken root; faith had turned into trust.

7. Remember me when You come to reign.
Having rebuked his fellow criminal, this repentant man, in perhaps his dying breath, seized his last opportunity. He may not have fully understood the implications of the lordship of Jesus, but he knew enough to realize that He was one to whom he could address his final hope: “Lord, remember me when You come into Your kingdom” (23:42). He recognized that he was hanging alongside divine royalty. Jesus was a king, exactly as the mocking superscription nailed by Pilate’s soldiers to the cross above His head recorded – “This is the King of the Jews” (Lk. 23:38). And He was going to enter into His kingdom through death. This man was not disappointed. Jesus said to him that on that very day, not on some far-off future occasion, he would be in Paradise with Him. The word “paradise” is a Persian word meaning “a walled garden of delights.” The Lord promised not only immortality, but also immediate entrance into the “third heaven” as His intimate companion, walking in the secure garden of eternal gladness with the King.

There are two destinies.
The two criminals were headed for two separate destinies – destinies which confront each of us as well. Are we like the one who had no place for God in his life, except to rescue him from the justice he deserved when he was in real trouble? Or are we like the one who began with this same attitude of self-interest, but changed to one of humble repentance, casting himself entirely on the forgiving grace of the One who bore the cross for him?

Bears thinking about, doesn’t it?