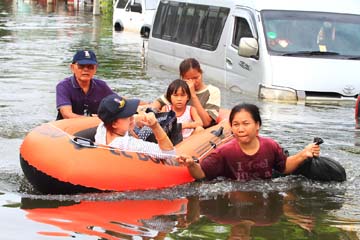 Where Is God When Disaster Strikes? The March 2011 earthquake and tsunami that ravaged the coast of Japan, left more than 28,000 people dead or missing, and knocked out the Fukushima nuclear plant. The reactor’s sea-wall was breached by a surge estimated at 14 meters (18 feet). Devastating natural disasters wreak destruction and destroy people’s lives, killing many. People ask where is God when innocent people suffer and die? How can He allow such calamities to happen? Doesn’t He love people? Disasters In The Bible Many natural disasters are recorded in the Old Testament. Most were God’s instruments of punishment. The Bible says they were God’s judgment of sin. For example, the global flood was God’s judgment of the great wickedness on the earth, and the people who rejected Noah’s preaching and continued in their sinful ways (Gen. 6:3-5). God destroyed Sodom and Gomorrah because of wickedness; there were fewer than ten righteous people in Sodom (Gen. 18:32).

Disasters also occurred in the New Testament. There were earthquakes when Christ died, when He came back to life and when Paul and Silas were in prison.

Disasters happen to us all. All are sinners who must turn to God or perish in hell. The massacre of the Galileans who had come to Jerusalem to worship, and the collapse of the tower weren’t God’s judgments on their sinfulness; they were warnings to all that unless they repented of sin, they were doomed to eternal punishment in hell. Disasters are not necessarily God’s judgment, but they are warnings of His coming judgment unless we get right with God.

Jesus also said that the weather doesn’t discriminate. When He taught the disciples to love their enemies He said that God “causes His sun to rise on the evil and the good, and sends rain on the righteous and the unrighteous” (Mt. 5:45). God shows His love to all people without distinction.

Disasters Follow Sin
After God created the universe, the Bible says, “God saw all that He had made, and it was very good” (Gen. 1:31). There were no disasters, suffering or pain in the original creation. But after Adam and Eve sinned, God told Adam: “Because you listened to your wife and ate fruit from the tree about which I commanded you, ‘You must not eat from it,’ cursed is the ground because of you; through painful toil you will eat food from it all the days of your life. It will produce thorns and thistles for you … By the sweat of your brow you will eat your food until you return to the ground … for dust you are and to dust you will return” (Gen. 3:17-19). A radical change took place: God’s creation was placed under a curse. Weeds grew, and nature was out of balance. Adam had to work for food. Death was introduced. Animals and people aged and died. Because of this curse we have earthquakes, tsunamis, floods, forest fires and droughts today. The world is full of natural disasters because sin has polluted our once-perfect world. That’s not what God planned, but it is a consequence of our rebellion and sinfulness.

Paul described it like this: “I consider that our present sufferings are not worth comparing with the glory that will be revealed in us. For the creation waits in eager expectation for the children of God to be revealed. For the creation was subjected to frustration, not by its own choice, but by the will of the one who subjected it, in hope that the creation itself will be liberated from its bondage to decay and brought into the freedom and glory of the children of God. We know that the whole creation has been groaning as in the pains of childbirth right up to the present time. Not only so, but we ourselves, who have the firstfruits of the Spirit, groan inwardly as we wait eagerly for our adoption to sonship, the redemption of our bodies” (Rom. 8:18-23). Here are more signs of the curse: all creation is under “bondage to decay” and it is groaning and suffering like a woman in childbirth. The scope is “the whole creation” so it affects Christians and the rest of God’s creation.

When people say, “How could a loving God create such a world?” they show their ignorance of history. God didn’t create it that way! We are reaping what Adam and Eve sowed. Life is a struggle for all creation because we live in a fallen world. It is not what God intended. Disasters are inevitable in the sinful world (Jn. 16:33).

God’s Response To Disasters
God created a perfect world where there were no disasters because there was no sin. This world changed when humanity sinned. We now live under the curse, outside the Garden where there are all kinds of disasters. We live between the fall and the restoration. But God sent His Son to take the punishment for sin by dying for us. Those who accept His rescue plan become part of His new creation where there will be no disasters because there will be no sin. Where there is sin, there is the curse.

Why does God allow suffering, when He has promised a new creation without suffering? Peter wrote: “But do not forget this one thing … With the Lord a day is like a thousand years, and a thousand years are like a day. The Lord … is patient with you, not wanting anyone to perish, but everyone to come to repentance” (2 Pet. 3:8-9). Why the delay? What seems a long time to us is not a long time to God. Because He desires everyone to repent and enjoy the new creation, God has delayed judgment. During this time, we can avoid God’s judgment by confessing our sins and turning to Him, realizing that Jesus has already taken our punishment.

Meanwhile we Christians wait eagerly for the redemption of our bodies and look forward to the Lord’s coming reign over the earth (Rom. 8:19,23). When He returns to set up His kingdom, creation will be released from the curse and will be “very good” once again. The Garden will be restored, the curse will be abolished and there will be no more suffering and disasters (Acts 3:21; Rev. 22:3).

What About Romans 8:28?
Romans 8:28 is set in a context to help us through difficult times: “We know that in all things God works for the good of those who love Him, who have been called according to His purpose.” God’s purpose, given in the next verse, is to conform us “to the image of His Son.” God wants to make us like Jesus, so we share His character. He wants our lives transformed (2 Cor. 3:18). Everything has this purpose, including disasters and suffering. Disasters provide opportunities to grow in our divine nature and become more Christ-like (Eph. 4:22-24).

But it is difficult to balance the physical and spiritual aspects of life. Paul said that God “has blessed us in the heavenly realms with every spiritual blessing in Christ” (Eph. 1:3). Here we see that the blessings promised to believers are spiritual, not physical. Although disasters and suffering might destroy our physical possessions, they don’t take away our spiritual blessings. God gives us what we need, not what we want. Jesus died to save our spirit and soul, not our body. At the resurrection He gives us new bodies. We know God loves us, not because of how life goes, but because of Christ’s death at Calvary.

Dealing With Disasters
We all will face disasters of some kind, and death sooner or later. The Bible says, “people are destined to die once, and after that to face judgment” (Heb. 9:27). Jesus said, unless we repent and turn to God, we will perish in hell. Are we ready to face disasters and death? It is presumptuous for us to refer to any disaster as God’s judgment upon this earth. We can’t say this with certainty because God hasn’t told us. When Peter wrote about the end times, which are characterized by disasters, he advised us to keep praying, help the needy, and use our gifts to serve others (1 Pet. 4:7-11). Disasters provide opportunities to help, to bring comfort and to pray.

God Is With Us In Disasters
When the Jews faced disasters in the Old Testament, God said, “When you pass through the waters, I will be with you” (Isa. 43:2). David said, “Even though I walk through the darkest valley, I will fear no evil, for You are with me; Your rod and Your staff, they comfort me” (Ps. 23:4). David was writing about the valley of the shadow of death – a time of great fear. But when he realized that God was with him, he was comforted. Disasters don’t separate believers from God. Nothing can “separate us from the love of God” (Rom. 8:35-39).

The Worst Is The Best
Paul said that “the sting of death is sin” that is unconfessed and unforgiven (1 Cor. 15:56). Because the Lord has forgiven the sins of believers, the sting of death has been removed. Instead, for the believer, death is the beginning of eternal life. If we know that our sins are forgiven, we can face death with confidence. Like David, we know that God is with us through “the valley of death.” Death actually ushers us into God’s presence, which is the best thing that can happen! Paul said, “to die is gain” because it means we’ll be with Jesus (Phil. 1:21). But for unbelievers death is the beginning of eternal punishment, and this is terrible. But God is giving plenty of time for people to turn to Him (2 Pet. 3:9).

Lessons For Us
Today disasters are God’s warnings of His coming judgment. They remind us of our need to be right with Him. They remind us that life can be taken away in an instant and there may never be a tomorrow. James warns: “You do not even know what will happen tomorrow. What is your life? You are a mist that appears for a little while and then vanishes” (Jas. 4:14). We live in an uncertain world. Disaster and tragedy could strike us at any time. Everything that happens, including disasters, is to bring us to Christ, and make us more like Him. Do we have a right relationship with Him?

So where is God when disaster strikes? As usual, He is on His throne, ruling all creation, loving us and preparing us for eternity.